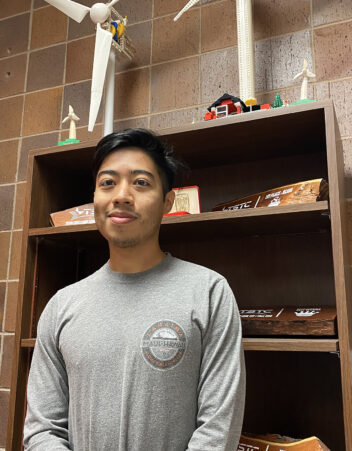 The peacefulness of the lake is calming for the Arlington, Texas, native. Because he does not have cellphone service there, he can be alone with his thoughts.

“It is very beautiful at the lake,” said Torres, who is studying for an Associate of Applied Science degree. “I like nature, and going out to Lake Trammell takes me away from people while giving me time to relax.”

There was, however, one problem.

“People continually dump their trash at the lake,” he said. “They were doing it at my little spot at the lake. I decided to make an effort to clean up as much as I could.”

When he is not picking up trash, Torres has other priorities.

“I like to do my homework out at the lake. I do not have any distractions and will be able to complete assignments,” he said.

When Torres told his story to Joni Coons, TSTC’s intramural events coordinator in Sweetwater, she wanted to help.

“I gave Axel a couple of garbage bags so he could pick up the trash,” she said. “When I learned why he wanted the bags, it made me feel so good. He is doing something to help others and to make the environment better.”

Torres said his time in Sweetwater has benefited his health. Growing up in Arlington, he was surrounded by a fast-paced life.

“There is nothing comparable to what is here,” he said. “One of the best decisions I made was to study wind energy at TSTC.”

It was not his first career option. Torres said he wanted to design games, but after some time thinking about that, he changed his mind. Working on computers was another option because he enjoyed the troubleshooting aspect.

After taking some classes in computer systems, Torres decided to review other options.

“I looked at the Bureau of Labor Statistics for high-demand jobs. I saw wind energy technicians would always be in demand,” he said. “I began researching schools and saw TSTC offered the associate degree.”

The job outlook for the wind energy industry is bright. According to onetonline.org, the need for wind turbine service technicians in Texas will increase 83% over the next decade. The average annual salary for a technician in Texas is $51,560, according to the website.