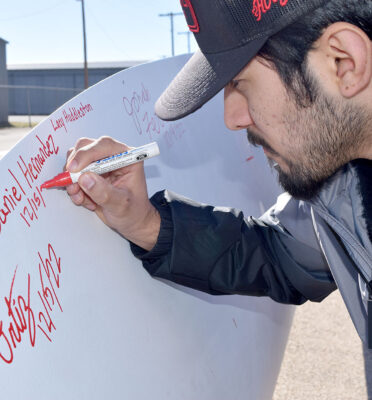 Russell Benson, an instructor in the program, wanted students who completed the core of the program to sign the wind turbine blade that is on permanent display in front of the Wind Energy Technology building to commemorate their time on campus. Most of the students will graduate during the fall commencement ceremony, while others will complete work on their associate degrees later by taking general education classes.

No matter where they stood academically, Benson wanted them to leave an impression for others to see.

“By signing the blade, this represents the students completing the core of the Wind Energy Technology program,” he said. “This is a way for them to remember their time at TSTC. I hope they will come back one day with their family to show them they signed the turbine and tell them of their experience.”

Gabby Mallet, associate provost of the Sweetwater campus, said she was excited that the students were able to do something small but significant that will mean more to them over time.

“I am so excited to see the beginning of this tradition for our Wind Energy Technology students,” she said. “By signing the wind turbine blade, it signifies the ending of their journey at TSTC but is a way to remember what they accomplished. It will also be motivation for future students to complete the program so they can leave their mark on TSTC and West Texas.”

The students were happy to be part of a new tradition.

“This is really cool. My name will be there forever,” said Dylan McLaury, of Aspermont. “I know that one day I will come here and show my kids and family. To be the first to start a new tradition is awesome.”

Emily Carr, of Odessa, said it was a special time since she signed the turbine along with her classmates.

“I have never seen anything like this before,” she said. “It is a unique thing that we are the first group to sign the blade. I will never forget my time at TSTC, especially when I can say that I signed a wind turbine blade.”

Manny Gurrola, of San Angelo, agreed with his classmates.

“This is a way for all of us to remember what we have accomplished in the program and at TSTC,” he said.

For Jonah Ferris, of Snyder, signing the blade took on a different meaning.

“This is a whole new beginning for us,” he said. “Going to TSTC has helped me prepare for the transition to the workforce. When I signed the blade, I thought about the trail of success I will leave behind and take with me at work.”

Benson said he had the idea for students signing the turbine blade after seeing a group looking at it. Several students had signed the blade before this year, but this was the first time a class did it together.

“I know this may seem like a little thing, but it is something they earned,” he said. “When they get to this point, the fourth semester, it is their fun semester. They are starting to realize their time is coming to an end and they will be ready to get to work. This is a small gesture for us to honor them before they walk the commencement stage.”

The job outlook for the wind energy industry is bright. According to onetonline.org, the need for wind turbine service technicians in Texas was forecast to increase a whopping 102% from 2020 to 2030. The average annual salary for a technician in Texas is $51,560, according to the website.

Registration for the spring semester is underway. For more information about TSTC, visit tstc.edu. 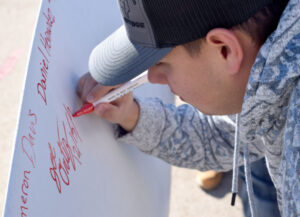