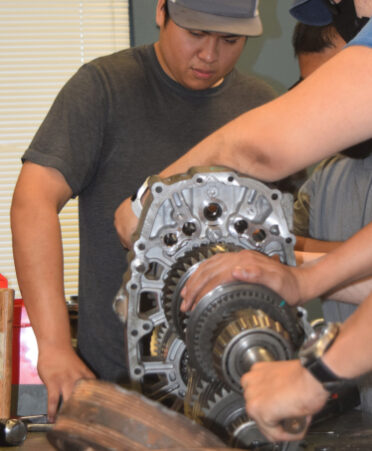 (SWEETWATER, Texas) – Irving Velasquez wanted to expand on the automotive knowledge that he gained from his father.

After learning that Texas State Technical College offers Automotive Technology, Velasquez knew it would be the best place to grow as a mechanic. He is studying for an automotive technician certificate at TSTC, with plans to open his own shop in the future.

Velasquez said he wanted to follow in his father’s footsteps as a mechanic.

“My father started teaching me about cars when we moved to Texas,” he said. “I knew from the beginning that I wanted to get better at it. I always wanted to go to school to be a mechanic.”

“My counselor mentioned TSTC, and I knew it would be good for me,” he said. “I knew I wanted to attend a technical school because they provide good training.”

Now in his third semester, Velasquez said he has learned more than he expected.

“The program has been enlightening for me,” he said. “We have learned a lot about engines, from how they operate to taking them apart.”

One of the highlights for Velasquez has been taking apart and reassembling the transmission of a vehicle.

“My dad taught me a lot, but he did not teach me about the transmission,” he said. “It was really challenging for me. I enjoyed being able to work with others to get the job done.”

With the guidance of instructors William Parker and Gerod Strother, Velasquez said he is able to learn different aspects of the engine. He is also watching his classmates and learning their techniques.

“I can learn a lot by watching some of these guys because of their experience,” he said. “I notice a lot of the little things they do, which helps me become a better mechanic.”

Parker said Velasquez makes things fun around the lab but knows when it is time to learn.

“He has some knowledge of vehicles. With that, he will be a good technician for someone in the shop,” he said.

The need for qualified automotive service technicians is expected to grow in Texas over the next several years. According to onetonline.org, Texas has more than 60,000 of these technicians employed around the state, and that number is forecast to top 65,000 by 2028. The average annual salary for a technician in the state is $46,680.

TSTC offers an Associate of Applied Science degree in Automotive Technology and an Automotive Technician certificate of completion at the Harlingen, Sweetwater and Waco campuses. Several other certificates, including Automotive Maintenance and Light Repair, Chrysler Specialization, and Tesla START Technician, and a Basic Automotive occupational skills achievement award, are also available, depending on campus location.