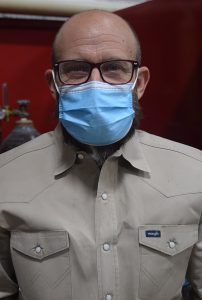 (BRECKENRIDGE, Texas) – Scott Rosignol, a 22-year veteran of the U.S. Army, dabbled in welding on weekends while living in Harker Heights.

But it was not until he moved to Breckenridge and toured the Welding Technology program at Texas State Technical College that he began to think of welding as a career option.

After talking with TSTC welding instructor Stephen Hope, Rosignol decided to enroll in the program.

“I talked to Stephen about what I wanted to do, and he told me everything that would be available. I saw how clean and organized he had the shop, and I was hooked,” he said.

Hope said working with veterans is one way he can give back.

“I always try to have a veteran in our program. They worked hard to serve our country, and it is my job to serve them in training them for a trade,” Hope said. “Many veterans learn so many trades in the military, and teaching them a trade for a second career is the least I can do. I always like to see veterans complete the program and give them a big hoorah.”

Rosignol is on track to earn his certificate of completion in August, but he plans to return to TSTC to earn an associate degree.

“This is the kind of environment I want to learn in,” he said.

After he retired from the military, Rosignol lived in Tennessee and had no real plans on what to do with his life. But he knew he wanted to do one thing.

“I wanted to further my education,” he said.

After working as an electrical and mechanical technician, Rosignol moved to Texas. It was by talking to his son that welding became an option.

“After my son graduated high school, he went to welding school and had some fantastic opportunities,” he said. “That piqued my interest in welding being a possible career.”

Rosignol’s goal is to complete his education and “just weld and make some money.” However, he may take his career a step further down the road.

“I probably will do my own thing one day and launch my own business,” he said. “But I need to get a few years under my belt.”

For now, the welding lab environment at TSTC leads to the best part of the day for Rosignol.

“I am excited that at the end of the day, I can look back on my pieces and see where I have improved,” he said. “The program does have its challenges, but that is showing me how much I am improving.”