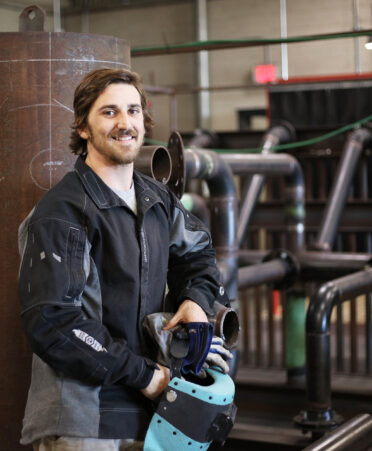 (ROSENBERG, Texas) – Welding is not something that is in Daniel Hillger’s blood. His father was not a welder and neither was his grandfather.

“I just kind of started doing it on my own,” he said.

If anything, the Texas State Technical College Welding Technology instructor was first drawn to the craft because of his interest in cars and trucks.

“There’s a lot of fabrication required, and welding is a big part of that,” Hillger said.

He learned a lot on the job at a fabrication shop, his first welding gig, while still in high school. He enjoyed what he was doing, and some of his co-workers encouraged him to pursue a career in the industry.

From there, things moved fast.

As soon as Hillger graduated from high school, he entered welding school, where he thrived.

As soon as Hillger finished his welding training, he started his professional career.

Hillger worked on everything from flare stacks at plants, traveling the country with one of the few companies that takes on those tall orders, to being lead welder for a shipyard — and everything in between.

“The places and things that you see, the things that you work on, are crazy,” he said. “I’ve worked on a fume extraction chamber for a rocket-testing facility that does testing for NASA. I’ve worked on cars — really high-end, expensive cars. All the petroleum and gas and oil and chemical plants in the last five years. I couldn’t even tell you what the names of them are.”

In 2021, Hillger began teaching the next generation of welders at TSTC. He covers night classes, which offer students flexibility based on their schedules.

Hillger hopes that his students can glean from him some of the wisdom and experience that he himself has picked up over the course of his career in the industry.

His biggest piece of advice comes from an old adage: Good looks can only get you so far.

“You can be a good welder, but you have to have a really good work ethic,” Hillger said. “If you’re humble, you have a good work ethic, you’re willing to learn, you’re flexible and you can weld, you’re good. That will get you jobs just about anywhere.”

TSTC offers Welding Technology training at all 10 of its campuses across the state. The program is part of the college’s Money-Back Guarantee. If participating graduates do not get hired in the field within six months of earning their degree, TSTC will refund their tuition.