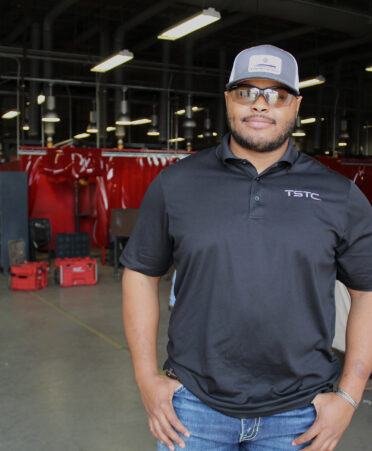 (ROSENBERG, Texas) – Jerroll Hodge is not sure where he would be today had one of his Agriculture Mechanics classmates not invited him to help build a trailer during his sophomore year of high school in Huntsville.

“Those guys saw my work ethic when we were in class, and they asked if I wanted to help,” Hodge recalled. “That was my introduction to welding.”

Now lead instructor of Welding Technology at Texas State Technical College’s campus in Fort Bend County, Hodge continued to weld throughout high school. Often he would find himself to be one of just a couple of Black students in welding competitions involving hundreds of participants.

Even though he loved welding, Hodge did not fully understand the trade — or its possibilities. And he did not have a plan for himself after graduating from high school.

“I had no idea how I was going to make a living for myself,” he said. “I wanted to find a way to work with my hands.”

Hodge earned his degree in Welding Technology at TSTC’s campus in Waco. After graduation, he worked in the industry until returning to teach the next generation of welders at TSTC.

Hodge has welded alongside professionals of many races in his career, but the fact remains that Black welders make up about 9.8% of the current workforce, according to the U.S. Bureau of Labor Statistics’ 2021 Current Population Survey.

“I made a sacrifice to leave everything to chase this trade and hoped that it would better my life, and it did,” Hodge said. “I did all this coming out of high school. If we can get those wheels turning before (students) have to walk that stage and get out on their own, it will be a better world filled with, hopefully, more Black welders.”

According to the American Welding Society, 314,000 new welders will be needed in the industry by 2024. Current welding openings, an increased demand for positions, and the anticipation of current welders retiring or changing industries are all factors contributing to the projected shortage, the organization added.

“That’s a lot of opportunity,” Hodge said. “If it’s something you see yourself doing for a lifetime, it will take care of you for a lifetime.”

Bryan Bowling, provost of TSTC’s Fort Bend County campus, understands the importance of dual enrollment classes in providing high school students with career pathways that can give them a head start at TSTC – and in life.

“We’re blessed to be partnered with school districts that focus on CTE (career and technical education) and STEM (science, technology, engineering and math) courses,” he said. “These districts are like-minded and offer dual enrollment opportunities.”

“A lot of these students don’t know where to start once they graduate,” Flores said. “Dual enrollment is giving them an advantage to do even more and get ahead.”

With TSTC’s industry-relevant programs and hands-on training — and its mission to place more Texans in good-paying jobs — students can attend TSTC with the knowledge that earning a degree in Welding Technology or other programs can be transformative.

“The American dream is alive and well,” Bowling said. “The door is open, and it swings wide. If you have the drive to learn and the desire to work, we’re here to help.”

Getting more Black students through that door is a matter of visibility, Hodge said.

“The best thing is to tell your story,” he said. “Be a good example, and show them the results. I think that’s one of the cool things about me having the opportunity to become the lead instructor here. African Americans come in there and see that — some of them have said, ‘A Black guy’s running the shop’ — and that’s motivating.”

Mitchell Jones II, who is Black and lives in Missouri City, returned to TSTC’s Welding Technology program to earn his second certificate of completion. He earned his first last semester.

Jones credited TSTC’s learning environment and friendships with classmates as reasons for continuing his training. He also pointed out the help available to students through the Advocacy and Resource Center such as the Lending Library, which loans out textbooks and equipment, and funding for other expenses.

“Take your time,” he said about the kind of advice he would give prospective students. “Trust the process. It’s all going to work out. It’s hard at the beginning, but it gets easier if you go on.”

As for advice he would give to prospective Black students, Jones talked about his family, some of whom are welders.

“You’re not going to be discriminated against,” he said. “This is a nondiscriminatory workplace. You can come here and work.”

Jones loves the creative aspect of welding — like Hodge’s helping to build that trailer a decade ago in Huntsville.

“You get to make cool stuff — stuff that you never thought you could make before,” Jones said. “Your mind just opens up to new possibilities.”

In Texas, welders can earn an average annual salary of $45,250, according to onetonline.org, which also projects welding positions to grow by 13% in the state through 2028.

Texas also employs the highest number of welders in the nation — 48,940, according to the U.S. Bureau of Labor Statistics. The Houston-The Woodlands-Sugar Land metropolitan area alone accounts for 18,090 of those positions, the most in any one area in the country.

The opportunity for a career in the welding industry is so great that TSTC guarantees that its Welding Technology graduates will get hired. If they do not find a job in the field within six months of earning their degree, TSTC will refund their tuition.