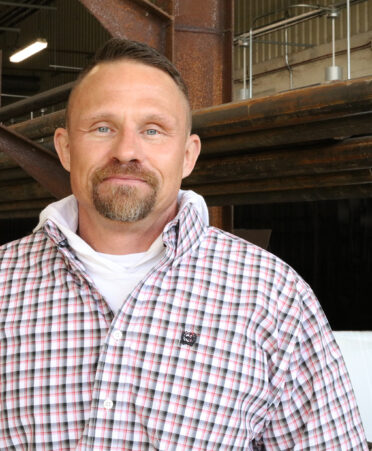 (ROSENBERG, Texas) – When it comes to welding, Matthew Bakus has just about seen and done it all.

“You throw something at me, I can weld it, but I think my strong point is telling students about the industry and what they need and what’s expected of them,” the Needville resident said. “I’m blessed to be here. I’m grateful for the opportunity.”

Though he was originally interested in ranch management, Bakus decided to enroll at TSTC’s campus in Waco to study welding.

“This is my chance to make a living,” he said, recalling a good experience with the instructors and the training. “I took the opportunity and kept going with it.”

After earning his degree in 1996, Bakus worked at M&M Mars and Fluor before returning to be closer to home — he grew up in Rosenberg and Richmond. From there, he began amassing experience at local fabrication shops, then refineries, power plants and chemical plants in the Houston area.

“It just progressed,” he said. “Finally I got to do what I really wanted to do, which was the pipeline work.”

If you can name a major pipeline, chances are that Bakus has worked on it. From the Dakota Access Pipeline to the Ruby Pipeline running from Wyoming to Oregon to the Mountain Valley Pipeline in Virginia and West Virginia to several others, he has been there, working in what essentially amounted to a dream job for him.

“When you’ve been in the industry as long as I have, yes, money’s a big factor, and then yes, the environment’s a big factor,” Bakus said. “Welding can be rough at times. It was the most money I’ve ever made. So that was a plus.”

Bakus worked at a nuclear power plant before returning to TSTC’s campus in Fort Bend County in 2020 to start teaching future generations of welders.

During his first year of teaching at TSTC, Bakus led a graduating class. Since then, a couple of the alumni have been back in contact with him, sharing stories of their success. One of them cut out a design of an elk on a plasma table and gave it to Bakus, who now has it mounted on his cart in the welding lab.

“These kids, they didn’t have it easy,” he said. “A lot of them I can relate to. They knew I had been there, done that. I wasn’t feeding them anything. They listened, they worked hard, and now their life’s good.”

Bakus continues shaping students through his instruction at TSTC, instilling in them both welding skills and wisdom, like the importance of having a good work ethic.

“As much as the kids drive me crazy, I know they’re getting something out of it,” he said. “Welding, that just comes natural to me now, but I know what to tell them. They like to hear the stories.”

His welding students at TSTC like to hear Bakus’ stories about his pipeline work most of all.

“When I was in West Virginia, I had a big old RV and a welding truck and my dog with me, and I was on like 500 acres,” he said. “My helper and I, we’d bonfire every weekend. I was able to hunt that land and pretty much do what I wanted. So things like that, the lifestyle, they love to hear about it. I try to iterate it’s not always like that, but they like to hear about that stuff.”

Most of all, Bakus wants prospective students to understand the value and caliber of the welding instructors they will get to learn from at TSTC.

“We’ve got a good group,” he said. “If you’re willing to learn, they’ll show you anything and everything. To me, it’s amazing. I think that we’re probably producing better skilled welders now than we used to because of that.”

TSTC offers training in Welding Technology at each of its 10 campuses. The program is part of TSTC’s Money-Back Guarantee. If participating graduates do not get hired in their field within six months of earning their degree, the college will refund their tuition.

In Texas, welders can earn an average annual salary of $45,250, according to onetonline.org, which also forecasts welding positions to grow by 13% in the state through 2028.