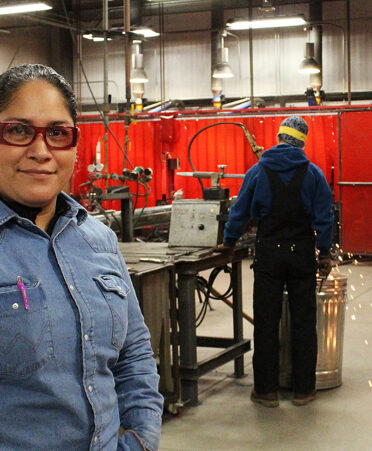 But the Texas State Technical College Welding Technology instructor’s family did not know she was going to school for welding until she brought her plate and pipe home to show her grandfather.

“They had no clue,” Steptoe recalled. “They thought I should work in an office.”

As a young mother, Steptoe realized she needed to make more money to support her family than what she was earning in her office job. Though she had originally gone to school to become a pharmacy technician, she decided to return to college, picking welding out of a course catalog.

Once she earned her degree, however, it was not a smooth path to start her career in the industry.

“It was hard finding work back then,” said Steptoe, who has been welding for 12 years. “It was hard, I think, being a female. I would drive all over Houston, outside of Houston. It was rough. I would go in, and the receptionist would see me, and I was like, you know what? I’m going to bypass them.”

Steptoe’s first shot came when she drummed up the courage to walk directly into a shop and ask a supervisor for a job.

She was already working at another shop when she realized one of her uncles worked there too.

Whenever Steptoe would talk welding with her cousins, they still expressed disbelief that she was actually a welder. It was not until they saw a parking pass for Houston-based Oceaneering on her car that they took her seriously.

Since getting her foot in the door, Steptoe has worked in shops around Houston, at a refinery in Port Lavaca, as a welding instructor and in other positions.

Looking back on the breadth of her career, she realizes that she was always the only woman in the shop.

“The crazy thing is, I never paid attention to it at that time,” Steptoe said. “When I started, I would notice when I’m working in there with my tools, everybody’s looking at me. I didn’t feel out of place. I never felt anything. I just went in and worked.”

Steptoe has taught at TSTC’s Fort Bend County campus for about a year and a half. During her time teaching, she has seen a promising increase in female students.

Her advice for those students?

“Just take it seriously,” she said. “Don’t give up. Don’t feel intimidated. It’s a skill anyone can learn.”

Teaching at TSTC has given Steptoe a particular brand of fulfillment, especially collaborating with instructors from many different welding backgrounds.

“I enjoy teaching — that’s satisfaction,” she said. “Students smiling and happy about their work — I think that’s really cool. I always encourage them.”

Even as Steptoe continues to motivate herself by learning new things every day, she hopes students can also glean lessons from her professional background.

“I hope they take pride in their work,” she said. “In whichever path they take, do the job well. As welders, that is what stands out. We are our biggest critic. We want our work to be flawless.”

TSTC provides welding training at all 10 of its campuses statewide. At its campus in Fort Bend County, TSTC offers an Associate of Applied Science degree in Welding Technology, certificates of completion in Structural Welding and Structural and Pipe Welding, and an occupational skills award in Basic Welding – Multiple Processes.

Welding Technology is part of TSTC’s Money-Back Guarantee. If participating graduates do not get hired in their field within six months of earning their degree, the college will refund their tuition.

In Texas, welders can earn an average annual salary of $45,250, according to onetonline.org, which projects that the number of positions in the state will grow by 13% through 2028.