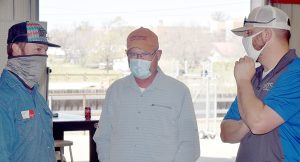 (BRECKENRIDGE, Texas) – When Monty Moeller learned that Texas State Technical College was hosting a high school welding event, he knew his students would be in attendance.

Moeller, the Rolling Plains Technical School coordinator and welding instructor, wanted his students to see TSTC’s facilities. Two of his students finished in the top three at the recent Breckenridge welding competition.

“Prior to the pandemic, I would always take our students on tours to see the programs offered in Abilene, Breckenridge, and Sweetwater,” Moeller said. “We are within 90 miles of each of those campuses.”

He has seen many success stories at TSTC, from his students to his own family.

“My son graduated from TSTC’s Wind Energy Technology program in Sweetwater,” Moeller said. “My son-in-law was in the same class as my son, and they did not even know what the future would bring them. They both have great jobs, thanks to TSTC.”

One student who Moeller is particularly proud of took the welding skills he learned at TSTC into a military career.

“He earned his degree and is using the things he learned at TSTC to protect our country,” he said.

Another student wanted to stay close to his home in Haskell. Moeller said since graduating from TSTC, the student is welding in Haskell while also learning other trades, like electrical work, on the job.

“I have told him and many of my students to soak up all of the knowledge you can,” he said.

With welding being one of Moeller’s focuses at the school, he looks for competitions throughout West Texas. In October, he hosted an event that was judged by Stephen Hope, TSTC’s welding instructor in Breckenridge.

“Monty and the school are big supporters of the programs we offer at TSTC,” Hope said. “We have had many students from his school enroll in West Texas.”

Hope said students from the technical school based in Rochester come into TSTC with an advantage.

“The students are a step ahead of many first-year students. That is a direct result of Monty and what he teaches,” Hope said.

It showed during the TSTC competition. The three students welded a 6-by-6-inch cube and continually ground the cube, and checked for leaks before the final judging.

“These students were prepared for this competition,” Hope said.

Moeller said students from smaller campuses, like Haskell and Benjamin, attend the school through a cooperative agreement. The purpose, like at TSTC, is to prepare people for the workplace.

“So many students do not go to college anymore. We set up our programs to help get people to work,” he said. “We also tell our students that if they go on to higher education, like TSTC, they will be more marketable.”

Moeller plans to bring additional welding students to competitions scheduled later this month at TSTC in Abilene and Sweetwater.

“The more we can show our students the great facilities TSTC has, the better chance they will come here to earn a certificate or degree,” he said.