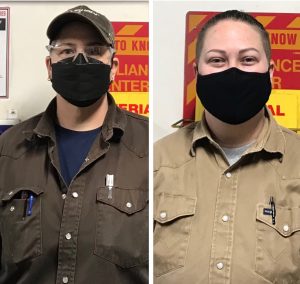 Kristin Burke, Samara Flener and Charli Wright bring decades of professional experience to teach their students to be the best welders they can be.

“Three of the five welding instructors at the East Williamson County campus are women, and they are setting a great example for our students and future generations,” said Lissa Adams, provost of TSTC’s East Williamson County campus. “The more women that choose technical careers, the more encouraged other women and young girls will be to explore these options. Welding is currently one of the top in-demand jobs in our region, making it an attractive and viable career choice.”

Burke, of Georgetown, has been an instructor in TSTC’s Welding Technology program for three years. She was inspired to pursue teaching by the instructors she had at Austin Community College.

“I figured it would be pretty awesome to be able to not only share my passion for welding with my students, but also be able to train the next generation of workers,” she said. “I get to weld all day, and impart knowledge on my students and see that light bulb come on for them.”

Burke became interested in the craft by way of her sister-in-law, Angela Cockrum, who once taught at TSTC’s Waco campus.

“They were offering a free welding program through the Fluor Corp.,” Burke said. “I signed up because I was interested, and as soon as I struck an arc for the first time, I knew welding was what I was meant to do.”

Burke said she looked to Cockrum as a role model because she always looked for the next step to better herself and her career.

“Every move I have made in the welding industry in the last 14 years is a step up from the previous one,” Burke said. “The sky’s the limit, and I strive to make every move better than the last to continue to grow as a person and in my career.”

“I’m a certified welding inspector, so I have done inspection on structural components for commercial buildings and in a production shop setting,” she said.

Burke said her advice for women curious about welding is for them to know they will have to work harder than everyone else to prove themselves.

“Don’t let that discourage you, though, because you definitely belong here,” she said. “If this is your passion, stick with it because being part of a select few that get to do what they love on a daily basis is amazing.”

Flener, of Austin, has taught for eight years in TSTC’s Welding Technology program.

“I had considered the possibility of teaching at some point and was fortunate enough to be offered an opportunity to come teach at TSTC by a former work colleague that was a TSTC instructor,” she said. “I had the opportunity to pass on my welding skills and experience to the next generation of welders, just as it was passed on to me, by my former teachers.”

Flener first began welding while working at a salmon cannery in summer 1990 in Alaska.

“I immediately fell in love with welding and returned to Austin to attend Austin Community College,” she said.

Flener counts Warren Donworth, her former instructor at ACC, as a role model.

“I learned from him what it means to pursue excellence, be of service to others, and that 90 percent of success is having a positive outlook,” she said.

Flener went on to work for 15 years as a pipe and structural welder and also did fabrication. She also worked for 10 years as an American Welding Society certified inspector, and she still holds the certification.

“I love welding, and I am fortunate that I had the opportunity to pursue welding as a career and am grateful to the women who paved the way for me and the other women in the industry,” Flener said. “I am also grateful to the men who acknowledged my ability and work ethic and who also helped me gain the skills I needed to excel in the trade.”

Wright, who has taught for two years at TSTC after spending four decades in the welding industry, credited Burke and Flener in making the move to the lab

“Their knowledge of this trade, passion for teaching and willingness and patience with me as a new instructor definitely helped me immensely in transitioning into a teaching role,” Wright said.

During the month of March, TSTC wants to honor women in history and right on our campuses who work to make strides in STEM fields every day.

“My hope is that more women will begin to see themselves in skilled trades and technical careers and will boldly enhance the opportunity that they provide, including increased earning potential, job choice and career stability,” Adams said.