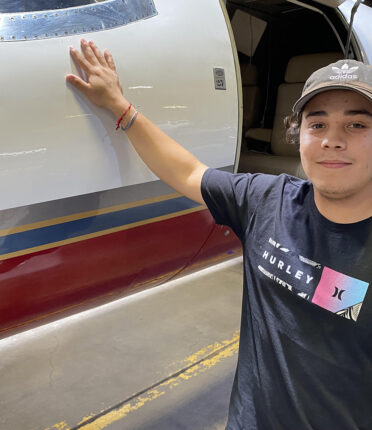 (ABILENE, Texas) – Ramiro Zamora is ready for the next step in his aviation career.

Zamora, of Eastland, is completing his final semester of the Associate of Applied Science degrees in Aircraft Airframe Technology and Aircraft Powerplant Technology (A&P) program. After graduation, Zamora will immediately begin work on his third associate degree at TSTC in Aircraft Pilot Training Technology.

It has been Zamora’s dream to become a pilot and having the knowledge of working on planes, he said, is an added perk.

“When I was little, I always liked going to the Ranger air show to see the antique planes,” he said. “I knew I wanted to work in aviation. Being able to work on planes is a great bonus since I want to become a pilot.”

Zamora said he started working in the aviation industry when he was 16 years old.

“I needed a job, so I went to the Eastland airport and would do anything,” he said. “I started out by just mowing the lawn around the airport. I eventually was able to clean some of the planes.”

Local pilots told him stories and Zamora was hooked.

“It was cool to hear all of the stuff they get to do,” he said. “I knew once I graduated high school, I wanted to study to become a pilot.”

After seeing some different costs involved, Zamora made the decision to attend TSTC. He later learned pilot training was available at the Waco campus.

“I began studying here knowing that having my A&P degrees would be a great addition,” he said. “I would have all my academics done so it would be an easy transfer.”

After touring the Waco program, Zamora said he is ready to soar during the next phase of his education.

“It is so impressive what is available for us to train with in Waco,” he said. “Seeing the different planes I will be able to train with made me realize I made the right choice.”

When Zamora begins the program, he will remember what he learned in Abilene and the runway of the Eastland airport.

During his time in Eastland, local pilots allowed him to take rides and help fly the plane.

“I never did solo stick time because I was not ready for that,” he said. “I am looking forward to the day I will be able to fly myself around.”

Zamora said being in the sky allows him to escape from what is happening on land.

“I have to be focused. When you are flying a plane, it really is a special feeling,” he said. “I cannot wait to experience that every day.”

Once he completes the pilot training program, Zamora said he will have plenty of options.

“I will be able to pick any career and be successful,” he said. “TSTC has been preparing me for that success.”

“He is a true team player and a knowledgeable student,” he said. “He knows the importance of being in class and learning as much as possible. If he misses time, he will always make it up. He will have an outstanding aviation career.”

The need for aircraft mechanics and service technicians in Texas is forecast to grow 8% by 2028, according to onetonline.org. The average salary for a technician in the state is $66,260, the website stated.