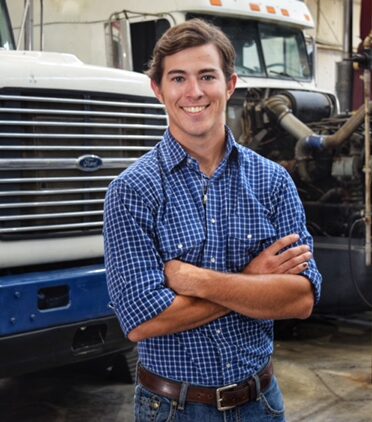 (WACO, Texas) – Luke Markham, of Belton, grew up with an appreciation for automobiles, but he also liked diesel equipment.

The students with whom he interacted during his time in home school thought he would pursue mechanical engineering. But Markham said the field did not interest him.

“I don’t mind standing out,” he said.

“I do everything nobody asks me to do,” Markham said. “I fulfill the expectations that others are not aware of.”

Some of Markham’s Diesel Equipment Technology instructors said he sets a good example for others.

“He led groups in his diesel classes to get students involved in class labs, and he goes above and beyond to do whatever is needed of him,” said Gary Greener, a TSTC Diesel Equipment Technology program instructor.

Markham was born in Virginia and grew up in Central Texas, with his family ultimately settling in Belton. He went to public school until second grade, then he attended home school. He also took dual enrollment classes through a local community college.

Markham and his family were looking for technical programs that he could go into after high school. He learned about TSTC through word-of-mouth. Markham and his father toured the Waco campus before he enrolled.

“It (Diesel Equipment Technology) just seemed more interesting to me,” he said. “It was a chance to learn more and try something different.”

Markham said what appealed to him about TSTC was the cost effectiveness of pursuing his associate degrees and the skills he would learn.

“They (the faculty) have been fantastic,” Markham said.

Markham will begin work at the end of this month at HOLT CAT Waco, where he will be a shop service technician. He feels good about his future in the diesel profession.

“I’m confident I will have pretty good job security for a while,” he said.

The Mike Torres Jr. Leadership Award is given to honor the memory of Waco native Mike Torres Jr., who taught in TSTC’s Digital Media and Design program until his death in 2005. According to the Waco Tribune-Herald, Torres graduated from Bishop Louis Reicher Catholic High School and TSTC’s Commercial Art Advertising and Integrated Digital Image program.

The award signifies qualities that Torres was known for: courage, honesty and integrity. The award is given each semester at commencement to a candidate for graduation who is nominated by TSTC faculty and staff members. It was first given in fall 2011, according to TSTC archival information.