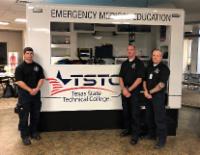 (BROWNWOOD, Texas) – Not all heroes wear capes, but some do arrive in big red fire trucks.

Three Brownwood firefighters, Ron Groom, John Hendrix and Justin Prince, volunteered to further their education and attend the Texas State Technical College Emergency Medical Services (EMS) program in Brownwood to become paramedics. It almost requires superhuman strength for them to maintain a full-time class schedule while being ready to fight fires and help save lives in their community.

“Any higher level of skill we can have is a benefit to the community. We usually are the first on scene, not always, but a majority of the time. So anything we can do to help is a benefit to everyone,” Groom, captain of the Brownwood Fire Department, said.

Firefighters in Texas are required to have training as basic emergency medical technicians. This is the first group from the Brownwood Fire Department to pursue paramedic licenses, the highest level for EMS responders.

Besides providing a higher level of service for the community, becoming a paramedic offers an opportunity for promotion within a fire station and is a bonus when applying with other stations.

“For anyone in this field today, education is extremely important, whether it’s as a firefighter or in EMS,” Groom said. “To be in those higher-up or leadership roles, they’re asking for more education on top of having that paramedic license. So it’s important if you want to pursue that.”

According to projections by O*Net Online, Texas can expect increases in emergency medical technician and paramedic jobs of 20 percent and municipal firefighter jobs of 17 percent by 2026.

“There’s a huge need for first responders. Paramedics, especially in the Brownwood area, are in large demand. These guys are helping to fill a need in the community,” Stephanie Young, EMS instructor at TSTC, said.

Working in a smaller department has benefits because firefighters train in a variety of fields, but it also offers challenges.

“Just because it says ‘fire department’ doesn’t mean it’s just fire,” Prince, lieutenant with the Brownwood Fire Department, said. “We’re considered a jack-of-all-trades, so if they don’t know who to call, they call us. We need to be prepared.”

The Brownwood Fire Department encourages anyone interested in becoming a firefighter or entering an EMS field to visit the station or TSTC and ask questions.

Groom, Hendrix and Prince are expected to graduate in spring 2020. For more information on