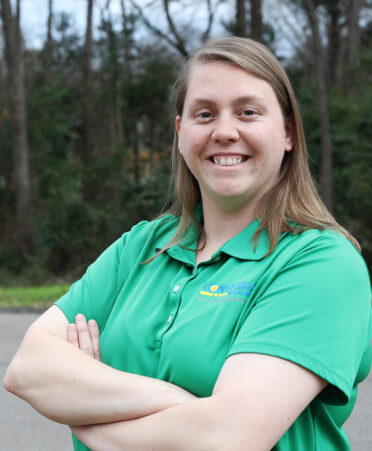 (ROSENBERG, Texas) – When Natasha Davis first started working at a major phone and internet provider, there were some things about the company’s operations that she just did not understand.

“I started to see our services going down,” Davis remembered. “My network engineers were trying to explain it to me, and it was way over my head. I was like, ‘I need to go to school so I can understand what they’re talking about.’”

After a little research, Davis realized that Texas State Technical College had a campus in Marshall, the same city where she worked.

“TSTC had a degree program that was going to benefit me, so I decided to go and get my degree so I could better understand what we were dealing with,” she said.

Since earning her Associate of Applied Science degree in Computer Networking and Systems Administration at TSTC in 2020, Davis, of Longview, has grown professionally, most recently becoming a voice technician with her company.

“It was exciting to put the skills that I’d worked to acquire to use,” Davis said.

She enjoyed taking on challenges in the Computer Networking and Systems Administration program, recognizing the progress she was making as she completed projects and passed classes.

Davis was thrilled when she started sailing past certifications that had tough first-time passing rates.

“It was really encouraging to know that I could do it,” she said.

Some of her favorite memories from her time at TSTC include competing at SkillsUSA.

“Even though I didn’t place, I was really excited to see how these skills were applied and what kind of things you need to be able to answer in a competition sense because it’s built by companies who actually use these tools,” Davis said. “That was a really great experience.”

She also loved the camaraderie she had with fellow TSTC Computer Networking and Systems Administration students, including helping them when they became stuck on projects.

“I quickly understood that when you’re able to show somebody how to do something, it means that you finally got it yourself,” she said. “By the end of my time at TSTC, I was able to pop off those answers because I knew it at such a level that it was second nature to me.”

Davis encourages prospective students to have a passion for what they are pursuing.

“Without passion, you’re not going to have the drive to learn it at a level that you can apply it,” she said. “You can learn it to understand it, but you need to learn it well enough to troubleshoot it. You’ve got to be able to visualize how the information flows. That’s what networking is: a connection of information.”

Computer network support specialists can earn an average annual salary of $62,280, according to onetonline.org, which forecasts the number of these positions to grow in the state by 17% through 2028.