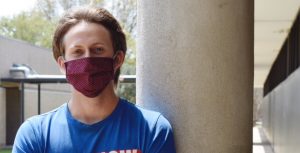 (WACO, Texas) – Jay Jackson is not daunted by a little hard work.

Jackson, of Bosqueville, is studying Biomedical Equipment Technology at Texas State Technical College and working on his family’s dairy farm in rural McLennan County. He also has a dream of attending medical school in Texas.

“The instructors at TSTC are able to make comparisons and not leave you at the deep end of technical jargon,” Jackson said.

“I find him to be a remarkable young person and wish we had more like him,” Plough said. “He has an insatiable appetite to acquire knowledge of many different subjects.”

Jackson said since being in the program, he has seen the array of career options that graduates can pursue. He said technicians can work in hospitals, for medical equipment manufacturers and at independent service organizations.

“It’s a good job that will give you predictable hours and very attractive entry-level pay,” he said.

The U.S. Bureau of Labor Statistics has predicted there will be a need for more than 56,000 medical equipment repairers by 2029. This is attributed to the nation’s aging population and the development of new and refurbished medical equipment.

Jackson took advantage of college-level dual enrollment classes while a student at Bosqueville High School. After graduation, he attended a community college and later transferred to Baylor University, where he graduated in 2019 with a bachelor’s degree in psychology.

To continue learning as he goes through the medical school application process, he enrolled last year at TSTC so he could understand how the medical equipment he will use in the future functions. After medical school, Jackson wants to stay in Texas and pursue orthopedics.

“I like the carpentry aspect of it,” Jackson said. “It’s an art to shape bones, especially with things like hip replacements.”

When Jackson is not studying or in class, he is working early mornings and late nights to keep cows happy and productive at the dairy farm.

“I like working on the dairy farm and helping my dad,” Jackson said. “I do whatever I need to do that day.”

Registration continues for the summer and fall semesters at Texas State Technical College. For more information, go to tstc.edu.