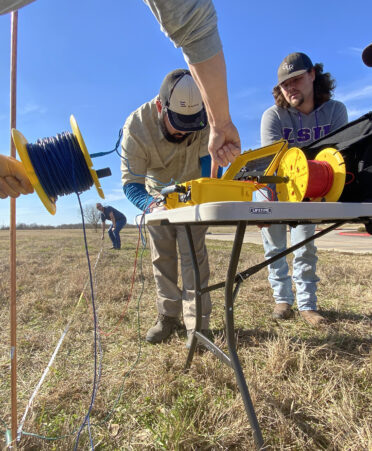 A group of 12 fifth-semester students in TSTC’s Electrical Power and Controls program conducted two industry-relevant tests during the project: a four-point soil resistivity test and a fall-of-potential test with a grounding rod.

Both tests are essential to proper electrical grounding for residential, commercial, industrial and utility construction.

“Wherever we live, we have grounding involved,” TSTC instructor Jonathan Bonkoske told his students. “Grounding is one of the biggest deals ever. Proper grounding techniques are supremely important. If there is a lightning strike within your proximity, I guarantee you that you will care.”

Bonkoske designed the project to be a culmination of what students have learned up to this point of their training, but it did not come from a textbook. Instead, he took his experience from working in the industry and applied it for a real-world training opportunity.

“I modeled a lot of our work, starting today with electrical testing, after my actual career-experience tests that I have done in the field,” Bonkoske told his students. “I brought that in here and developed these labs out of that.”

The forms and charts that students would fill and map out following the project are accurate to the industry and will make relevant additions to the students’ portfolios of work documenting their training at TSTC.

Electrical field service technicians — a possible career path for the TSTC students — would normally conduct the pair of tests before new construction begins to determine the needs of the site.

High voltage can make a conductor out of anything, Bonkoske explained. That is why houses, buildings and other facilities need a grounding rod or other grounding systems.

The makeup of the soil — sandy silt, in the case of the field on campus — and its resistance at any given site also impacts the choice of a grounding system. Even the weather plays a role in the testing — a beautiful 71 degrees with 28% humidity on campus at the time of the project.

Students broke into two groups and sank four electrodes into the soil, each separated by 6 feet of distance. Testing equipment sent out an electrical current, and students recorded the voltage. Afterward, students pushed a copper grounding rod into the soil and charted the resistance values at 5-foot increments all the way out to 70 feet.

Bonkoske supervised, offering direction and assistance with the equipment as needed, watching students learn how to perform tests like the ones that he has spent his career completing.

“That is what drives me,” he said. “I’ve lived all these courses, and I’ve put my experiences into the content. That is exactly what it means — it is experience.”

Graduates of TSTC’s campus in Fort Bend County are positioned for success in getting hired in the industry, as the Houston-The Woodlands-Sugar Land metropolitan area has the seventh-highest employment level of electrical technicians in the nation, according to the U.S. Bureau of Labor Statistics.

In Texas, electrical technicians can earn an average annual salary of $69,310, according to onetonline.org.