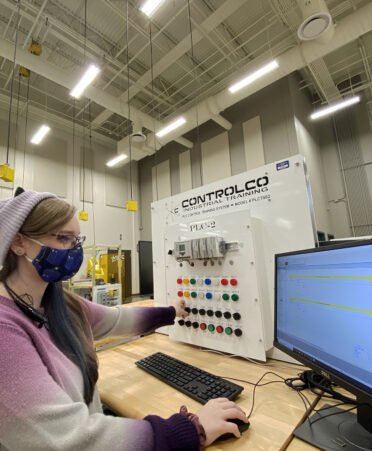 (ROSENBERG, Texas) – Helena “Lani” Orr does not look like a typical electrical technician.

But once she earns her Associate of Applied Science degree in Texas State Technical College’s Electrical Power and Controls program, she hopes she can help change that — particularly since the industry resonates with her and comes with an added bonus of job security.

“A lot of things are getting replaced with machinery — especially in automation in factories,” Orr said. “You actually need a person to do all this maintenance. That can’t be done by robots — yet. Hopefully by the time they get a robot to do it, I’m retired.”

Orr, of Katy, has found her niche at TSTC. With hobbies like sewing, crocheting, knitting and participating in her high school’s robotics team, she knew her interests were more hands-on.

“I already knew I wanted to go to a smaller school,” Orr said. “I couldn’t deal with all those people.”

A high school counselor and a couple of campus tours convinced Orr that TSTC was the college for her — especially with her desire to explore training in engineering- and math-based fields.

“It’s been really nice,” Orr said of her TSTC experience. “It’s a lot easier for me to learn hands-on and with a smaller class size. I can actually talk to instructors and get specific help.”

That help can be basic clarification on a current project or a look at the big picture, delving into the curriculum.

“Lani is an amazing soul,” said Jonathan Bonkoske, TSTC’s Electrical Power and Controls lead instructor. “She is really tuned in.”

TSTC instructors’ willingness to devote extra time to ensure that students understand — and the affordable cost compared to other colleges — made TSTC Orr’s best choice, she said.

She sees the Electrical Power and Controls program making a big impact on her future.

“One of the things I like about this degree is I can go for several different jobs using the same degree,” Orr said. “It’s very versatile in what it can be applied to.”

Orr encourages other women to think about their hobbies and look at their options when deciding on the direction for their education and training. If they like hands-on activities like crafts or intricate projects like building computers, then they might find a home at TSTC – just like Orr did.

TSTC offers an Associate of Applied Science degree in Electrical Power and Controls at four of its campuses, including in Fort Bend County.

In Texas, electrical and electronic engineering technologists and technicians can earn an average salary of $69,310 per year, according to onetonline.org, which forecasts an 8% growth in positions statewide through 2028.

TSTC’s Electrical Power and Controls program is part of the college’s Money-Back Guarantee. If a graduate of this program does not get hired within six months of earning their degree, TSTC will refund their tuition.

Enrollment for the spring semester at TSTC is underway. For more information, visit tstc.edu.