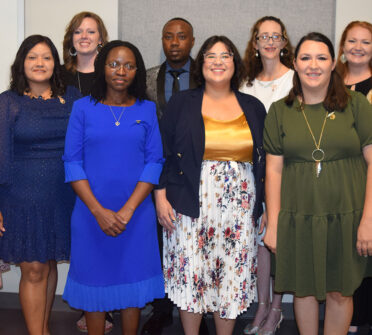 Ten nursing students held back tears while thanking their families and the TSTC faculty for their support during their time in the program.

“As many of you know, this has been a challenging year,” said Carrie Hahn, who spoke for her classmates during the ceremony. “As a cohort, we have laughed and cried together, supported each other, and cheered each other to get through every assignment, quiz, exam and clinical. As a class, we had study sessions before exams and check-offs, shared tips and tricks for studying, and sometimes relied heavily on each other.”

Hahn and each graduate thanked the instructors for their consistent support.

“We had an amazing and inspiring group that coached, encouraged, prayed and even cried along with us,” Hahn said. “Because of these women, we have been given the necessary tools needed to become successful and thrive as we take the next step in our nursing careers.”

Instructor Charlene Rice said the students worked hard during their three semesters in the program.

“I am really proud of where you are now in your career,” she told the graduates.

Instructor Linnea Brown recalled how many of the students felt overwhelmed at some point in the program.

“Each of you looked at me and told me you could not do this,” Brown said. “Look at you now. We are not going to go away. We will be cheering you on during all of your endeavors.”

Rice said it was the support of each family that motivated the students.

“It takes a whole family for someone to be successful in this program,” she said. “If it is someone going for breakfast burritos at 4 a.m. or picking up children after school, that support did not go unnoticed by the students.”

Graduate Virginia Esparza, the mother of eight children, thanked her family by name during the ceremony.

“This still feels like a dream to me,” she said. “It came with a lot of sacrifices, mainly with my family. I wanted to show them I could do this.”

Maria Martinez agreed with her classmates that it was the support from her family that led her to the finish line.

“We made it together along this path,” she said. “I could not have finished this journey without you.”

The pinning ceremony is held at the completion of the three-semester Associate Degree in Nursing program. Each graduate picks out a pin signifying they have completed the program and are now nurses, Rice said.

“The pinning also means they are ready to serve society,” Rice said.