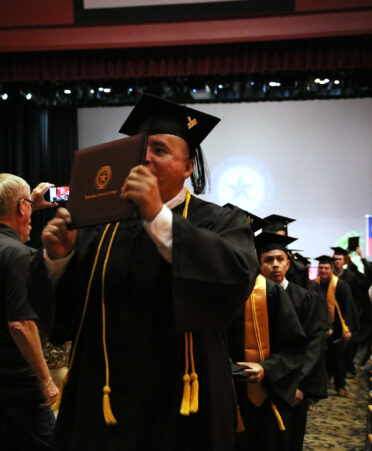 Cheers filled the air as music pumped through the auditorium, with graduates dancing through the aisle and waving at loved ones after collecting their associate degrees and certificates of completion.

“The commencement ceremony is the ultimate celebration and recognition of our students and their success,” said Bryan Bowling, TSTC’s Fort Bend County provost. “There’s great honor, respect and fanfare that each of our graduates has earned, and this is our chance to officially shower them with well-earned praise. It is a tremendous moment, and I admit that I get tears in my eyes during each and every ceremony.”

“Hopefully I get a welding job, get my foot in the door and eventually get into pipeline (welding),” he said.

Nathan Garza, who earned an Associate of Applied Science degree in Precision Machining Technology, was also excited to collect his degree.

“Two years in the works,” he said.

His favorite memory from his training was a saw-table project that spanned two semesters and consisted of 32 pieces that he had to machine — milling and lathing.

“It was pretty tough — you had to bounce back and forth,” he said. “I was the only one in my class who finished it.”

“It’s been a good journey,” he said, adding that he started a job this week with Secure Lox Co.

Brycen Toups, who earned an Associate of Applied Science degree in Diesel Equipment Technology, looked forward to spending time with his family after commencement. One of his favorite memories from his training at TSTC was learning from the instructors.

During the ceremony, TSTC’s Fort Bend County associate provost John Kennedy remarked on the idea that graduation represents both an end and a beginning.

“Graduation is a culmination of a lot of hard work, but it is also the start of something that you’ve earned,” he said. “You’ve earned a good career in a highly technical environment that will provide for you and your family.”

Sarah J. Martin, Ph.D., director of Career and Technical Education at Katy ISD and the commencement guest speaker, lauded the graduates, celebrated their achievements and urged them to use their skills to improve life as we know it.

“You are stepping onto the front line of innovation and into a world that needs your vision — your passion,” she said.