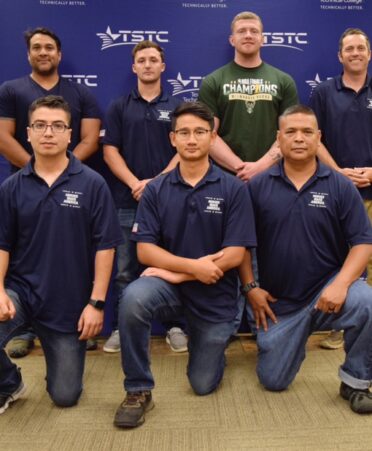 The 12-week program enabled soldiers to travel to Waco four days a week to take classes in mechatronics, with a focus on electrical systems, electrical motor control systems, industrial electricity and other topics. The soldiers also had the opportunity to earn up to seven certificates from the Smart Automation Certification Alliance.

The students were commended for their work ethic, willingness to learn and drive to succeed.

“You guys have been a great class,” said Adam Barber, TSTC’s executive director of Workforce Training for the East Williamson County, North Texas and Waco campuses.

The classes were taught by TSTC workforce trainers Larry Griffin and Eric Schafer.

“They were a very fun class to teach and very energetic,” Griffin said. “I’m really happy to help them in the next phase of their lives.”

Hting nan Maran, an Army sergeant with six years of service, will transition out of the military in September. The Myanmar native and Killeen resident said that on the first day of the program the equipment looked like the equivalent of rocket science, but he is happy about the tremendous progress he and his classmates have made.

“I like how TSTC is very supportive of this veterans’ group,” he said.

Each Wednesday of the program, employer representatives spoke to students both virtually and in person about the need for workers. Some of the companies that took part included Mars Wrigley Confectionery and Samsung Group.

Austin Haynes, an E4 specialist who will leave the military later this year after more than three years of service, grew up in West Virginia and lives in Killeen. He said interacting with industry representatives gave him and his classmates motivation to learn more in classes.

“If you don’t have hands-on (work), you don’t really understand it,” he said.

Because of the program, Haynes will start a new job in August as a maintenance technician at Samsung Group in Austin.

Marvin Branch, a manager at the Heroes MAKE America program, said he plans to reach out to the soldiers to speak to future cohorts about the work they are doing in the manufacturing industry.

Branch said plans are to have three program cohorts start each January, May and August at TSTC. The next cohort is scheduled to start on Aug. 30.

“Heroes MAKE America is a great partner,” said Edgar Padilla, provost of TSTC’s Waco campus. “We will continue to build this program.”

For more information, go to themanufacturinginstitute.org.