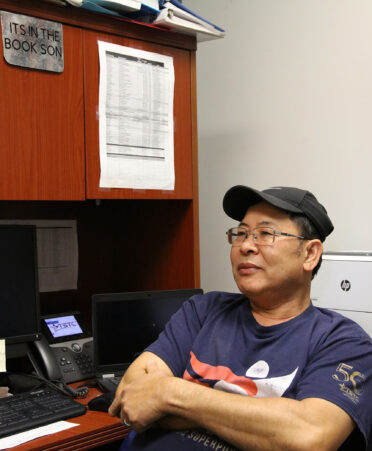 He says it so often that his students made a sign for his office — and an embroidered hat — for him with those words.

Part of the saying stems from educating students about the necessity of reading their textbook. The answer to the question the students are asking?

It is in the book.

The “son” in the saying is another facet to how Nguyen, who has worked at TSTC for six years, approaches teaching.

“I call them all ‘son,’” he said. “I treat them all like my own kids. I want them to be successful.”

Nguyen leverages his background and the challenges he has faced throughout his life as a motivational tool for his students.

Nguyen grew up in Vietnam during the Vietnam War. He and his family lived under communist rule following the war’s end in 1975.

“Living under them (the communists) was terrible,” he said.

At 18, he joined a rebel group, but was subsequently caught, tortured and imprisoned by the regime in a re-education camp.

“It was really a hard-labor camp,” Nguyen explained.

He was able to escape, hiding in the jungle in a cave for several months before he was able to reconnect with his family, return to the city and find a way out of the country.

Nguyen was part of the exodus of refugees known as the Vietnamese boat people.

Rescued by the U.S. Navy, Nguyen spent the next five months in a refugee camp in the Philippines. On Nov. 14, 1981, he arrived in the United States.

“I was 20 years old, didn’t speak the language, was by myself in this country, and I had to work, go to school, support myself — and send money home to support my family,” Nguyen recalled.

He majored in computer science and worked in the technology field for years until his position was outsourced in 2009. Nguyen decided that it was time to go back to school to switch careers. His wife, whose brother was a licensed HVAC contractor, asked him to consider a career in the heating, ventilation and air conditioning industry instead of the medical career that he had his eye on.

“I did some research and found that it’s a good field,” Nguyen said. “It takes less time to finish, and you can make a lot of money.”

Nguyen got his training and now tells his HVAC students at TSTC the same thing — that HVAC training leads to good careers.

“I help them as much as I can so they can be successful,” he said. “TSTC has a good reputation. We’re really flexible and treat students like family.”

In Texas, HVAC mechanics and installers can earn an average annual salary of $47,980, according to onetonline.org, which predicts that the number of these positions will grow in the state by 16% through 2028.