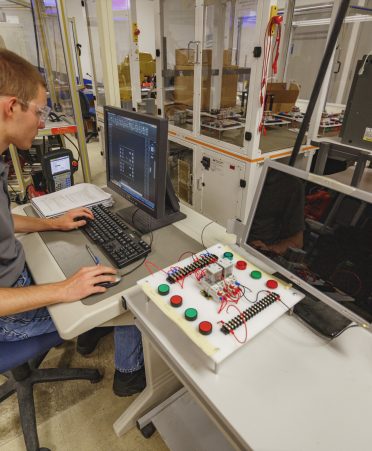 (MARSHALL, Texas) – The 10 letters that make up the word “automation” carry a lot of weight in how we work now and will in the future.

Automation, which combines instrumentation, mechatronics and robotics, is increasing in East Texas and throughout the nation, Clark said.

“Right now, I can’t place as many students as there are jobs,” he said. “Manufacturing has gone through a new era. It is called Industry 4.0, the Fourth Industrial Revolution. It is a revolution of smart devices. We are at a point where everything can communicate with everything else via smart devices. That has changed everything with manufacturing.”

Some of the automation jobs open now in East Texas include those for automation engineers, automation technicians and electrical maintenance technicians, according to Indeed.com.

TSTC Automation and Controls Technology graduates have been hired by AEP, Phillips 66, Worley and other companies, according to information from TSTC’s Career Services department.

“Today’s students, and tomorrow’s industrial leaders, must be automation-savvy,” said Doug Shryock, director of workforce and economic development at the East Texas Council of Governments in Kilgore. “They must have foundational knowledge and be fearless in learning new applications and techniques. Companies in the age of telemarketing looking to hire are less concerned about where their employees sit, and more concerned about connectivity and technological aptitude.”

The World Economic Forum has estimated that by 2030 more than one billion people will need to be reskilled because of job transformation during the Fourth Industrial Revolution.

“Maybe it (automation) will do away with certain traditional jobs, but it will create specific jobs that understand how the robotics work, how the operations work, how manufacturing works, how smart sensors work and how to interpret the data,” said Roland Leija, lead instructor in TSTC’s Mechatronics Technology program in Harlingen. “What we are doing is training that generation of technicians that is familiar with smart systems, automation systems and Industry 4.0.”

Leija said workers may find themselves next to “cobots,” collaborative robots that have built-in sensors. He said they are low-velocity robots that can be within inches of a person and stop if bumped into. He said preventive maintenance is a key component of automation. Workers will be needed to maintain conveyor belts, robots and other equipment.

Clark said it is critical to tout the benefits of automation jobs and the salaries that can be earned to students before they enter college. But workers already in different stages of their careers also need to consider the future of automation jobs.

“We have a great opportunity to train that young workforce to be ready and willing to tackle this new technology, and the companies will prosper because of that,” Clark said.

Leija is excited about the future of automation and its job potential.

“It is only going to get better,” Leija said. “At some point, it will transition to some basic levels of artificial intelligence where you will have a system to manage certain things, maybe with some human interactions and permissions given to it.”