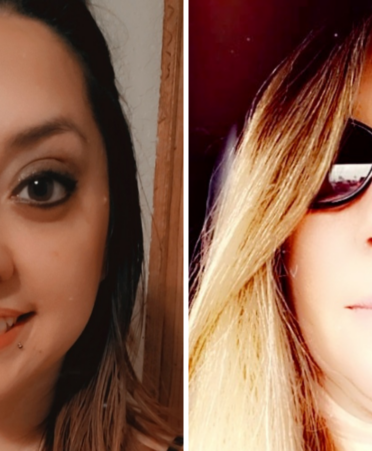 (ROSENBERG, Texas) – Although the cybersecurity field is still dominated by male workers, two female graduates from Texas State Technical College are finding their place in the data security and tech world.

Claudia Reyes, of Harlingen, has always been interested in computers.

“Even now, if it has buttons on it, I want to push them,” she said.

Because of that lifelong interest, Reyes’ mother encouraged her to pursue a path that took her into the field of technology. A passion for hands-on work and advocacy against cyberbullying led Reyes to earn a degree in TSTC’s former Computer Networking and Security Technology (now Computer Networking and Systems Administration) program in 2019. At the end of 2021, she obtained an advanced technical certificate in Digital Forensics.

“I like computer networking, but I love digital forensics because in that field you help everybody,” Reyes said, describing how experts can locate and analyze data in different scenarios.

The fact that the cybersecurity industry is viewed as a man’s world does not bother Reyes, particularly since she is also a successful billiards player — another arena where it is rare to see very many women.

“I’m used to it — it doesn’t really make me feel intimidated,” she said. “If it’s a challenge, or if people doubt me, I make sure I do it and do it well — and do it better than they thought I could do it. That’s really my mentality on everything.”

With an eye on a future goal of working for national law enforcement agencies, Reyes is currently immersed in another focus: promoting locally owned businesses. She now manages the social media presence for a handful of local businesses.

Her advice for women looking to enter into the cybersecurity field is just to try.

“Everything now is shifting to computers,” Reyes said. “You can do anything with computer knowledge. I would just go for it.”

Rae Davis, of Aubrey, a suburb of the Dallas-Fort Worth metroplex, earned her degree in TSTC’s former Computer Networking and Security Technology program in 2011.

Her interest in the field began in hacking. As a teen, she would spend time connecting with others in Internet Relay Chats — IRCs.

“We would meet and network online, exchange different exploits, codes, viruses — stuff like that, and then basically just wreak havoc,” she remembered. “I was way into computers.”

Later in life, as a single mother of two, Davis decided to “formalize” her education in technology so she would be able to advance in a career past help-desk jobs.

The decision brought her to TSTC.

Now, Davis is a senior security engineer at Rent-A-Center’s corporate offices — and the only woman on the team, particularly in engineering.

“It’s been challenging,” she said. “The trick is — and the thing I love about being a female in a male-dominated world — is they tend to underestimate you. So when you go above and beyond their expectations, they’re the ones that feel small. At the end of the day, it was your contribution that got that system up and running.”

Working in this field is Davis’ dream job — even as it is necessary to continue growing and learning, such as getting additional certifications and training in cloud security, for example.

“Technology is not going anywhere, but you’ve got to grow with the technology and with the field,” she said.

As for advice for women looking to enter the field, Davis recommends seeking out other women who are already established — including TSTC instructors.

“We’re a lot more social and a lot more willing to help out when somebody needs help,” she said. “Also, get close to your instructors. They’re going to be your biggest asset. They want you to succeed as much as you want to succeed.”