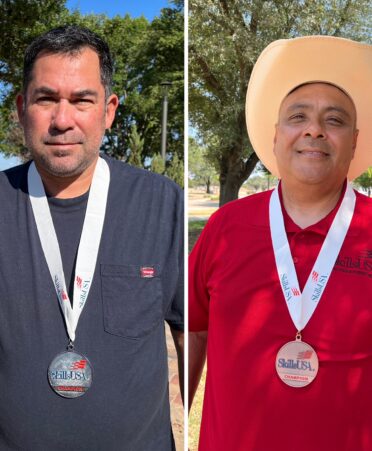 “I am excited we have medalists,” said Elaine Sulak, an associate provost at TSTC in Waco. “I’m proud of the students and how all their hard work has paid off.”

Lopez learned about SkillsUSA through his involvement in the program’s Diesel Equipment Technology Club.

He won a silver medal in Diesel Equipment Technology and a gold medal in Facilithon at the SkillsUSA Texas Postsecondary Leadership and Skills Conference in April in Houston.

For both the state and national contests, Lopez completed an online test and worked through scenarios and emergency situations. He said it was a relief when his name was announced as a national medal winner.

“It was crazy,” he said. “You could look out (from the stage) and see everyone with the glow sticks and the lights.”

Lopez, who was previously an elementary school teacher, wanted to make a career change and used his interest in tractors and construction equipment to choose his program of study at TSTC. He is pursuing a certificate of completion in Diesel Equipment Technology – Off-Highway Equipment Specialization and is scheduled to graduate in December. He is working in maintenance at Herzog Transit Services Inc. in Austin.

“It’s a lot more than I expected,” Lopez said about the program. “I like the hands-on aspect. It requires critical thinking when troubleshooting and taking apart and putting together. It’s a different way of exercising your brain.”

“I saw some pictures of past competitions, and Jimmy (Bibb) told me there would be cast iron, PVC (polyvinyl chloride) and copper sections (in the national contest),” Martinez said.

Martinez won the gold medal at the state SkillsUSA postsecondary competition, enabling him to represent Texas on the national level.

“I wasn’t surprised by anything,” he said about the national competition. “The instructors told me accuracy would be a big emphasis. There was nothing new that I had not seen, really.”

Martinez said he was excited to meet so many young adults who are passionate about plumbing and other trades.

“You just don’t see that many youths gearing up to do actual work,” he said. “Everything (many young adults) want to do is on a computer.”

Before coming to TSTC, Martinez worked in construction and helped his father maintain rental properties.

“It (plumbing) is a career change for me,” Martinez said. “Construction can be hard on the body.”

This fall Martinez will start the new Associate of Applied Science degree in Plumbing and Pipefitting Technology – Journeyman at the Waco campus.