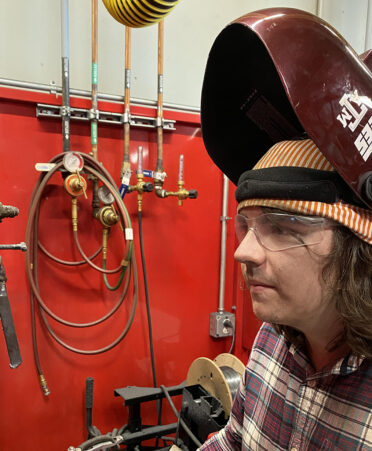 (ABILENE, Texas) – When Lucas Robirds returns to Texas A&M University this fall, he will be able to tell his friends that he learned a new skill.

Robirds, an aerospace engineering student at Texas A&M, is spending his summer break studying Welding Technology at Texas State Technical College. He is participating in the Bachelor’s+ Program, a professional education partnership between the Texas A&M Engineering Experiment Station (TEES) and TSTC.

“I did not have any welding experience when I started this summer,” said Robirds, who will graduate from Texas A&M in December 2022. “I came in fresh. And since day one, I have been welding more than seven hours a day.”

During an informational meeting about the partnership, Robirds learned that Welding Technology would be available at TSTC’s Abilene campus. Since Abilene is his hometown, he decided to learn a new skill.

“I made the decision to be part of the program because I wanted to learn something new, and it would allow me to be close to home,” he said.

Robirds is no stranger to TSTC’s programs. He was a dual enrollment student in Computer Networking and Systems Administrations while attending ATEMS High School in Abilene.

“I knew TSTC offered quality programs, and I have not been disappointed with what I have learned so far,” he said.

Since his first day in class, Robirds has learned that he can depend on the welding instructors to help him with any questions or problems.

“I was immediately put on a machine, and everyone helped me get started,” he said. “I was intimidated by some of the machines and how well the other students were doing in class.”

Robirds has seen his work improve since that first day.

“I picked up things pretty quickly. It was only a matter of practice,” he said. “I would say I am pretty ‘good-ish’ at it.”

Having the partnership in his hometown also allows him to visit friends and family. His parents have been supportive of his decision to take the one-semester welding class.

“I wanted to learn how to weld in high school, but I did not have the time, and I knew there would be many expenses,” he said. “The Texas A&M program is allowing me to learn something I have always wanted to do. I have enjoyed being part of the program.”

Bachelor’s+ Program students could choose among Architectural/Mechanical Drafting, Cybersecurity, Electromechanical Automation and Welding. The programs, offered both online and in person, span nine weeks and include a certificate of completion at the end.

The Bachelor’s+ Program will be offered to Texas A&M Engineering students again in the summer of 2022.