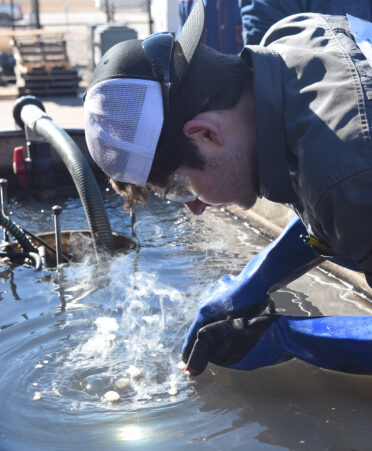 Pesak, executive director of the Texas High School Welding Series (THSWS), watched as more than 150 high school students competed for over $209,000 in scholarships, as well as welding certifications, at TSTC’s Abilene campus. It was the first event held in West Texas for the THSWS, and Pesak said the group will return.

“From the students, I received nothing but positive feedback,” he said. “From the way they were treated to the ways things were laid out in the facility, the students were all smiles.”

Pesak also received positive feedback about Scott Wallerman, who served as the certified welding inspector for the event. Wallerman, who works with Broadwind Heavy Fabrications, spent time with each competitor to discuss their work. Wallerman was assisted by TSTC Welding Technology instructor Erik Barnes.

“Scott did a great job providing the students with constructive criticism,” Pesak said. “That will allow the students to learn and become better.”

Wallerman said he wanted to spend time with each student so they could improve their work.

“That is how I got better. I had people mentoring me all the time,” he said. “They helped me grow in the trade. If I can give each one of these students a piece of advice to help them, I know they will use it throughout their career.”

Wallerman said he hopes to continue serving as the certified welding inspector at different events because it will help young people grow.

“This was an awesome event for so many students,” he said. “It is great to see a skill and trade like welding being showcased.”

TSTC Welding Technology instructor Greg Nicholas helped plan the event and was pleased to see welders come to Abilene from across the state.

“This was an awesome event that showcased our campus and the welding program,” he said. “We enjoyed having everyone here and look forward to continuing the partnership.”

The students also enjoyed competing in various competitions, including a timed cutting event and an underwater welding showcase.

Ruby Gaytan-Costilla, a senior at Poteet High School, was one of the many who attempted underwater welding.

“It was difficult because you could not see anything,” she said. “It was fun to try something new. Every competition I attend, I want to do more and more of the events.”

Wrangler Little, a junior at Loraine High School, won the level one contest and was ready to let his father know the results.

“I cannot wait to get home and brag to my dad,” he said. “I cannot believe I got first place and passed my certification test. I hope we can do more of these events because it was a lot of fun.”

The welding event was not the only activity for Haskell High School senior Brittany Andrews. After she learned the results, her high school basketball coach picked her up for a playoff game scheduled for later in the day.

“Welding gives me something new to compete in,” she said. “This actually gives me a better look at what to expect in the real world.”

Andrews, who along with her teammates won the playoff game the same day, is planning to use welding as a hobby later in life.

“I enjoy spending time working on different projects,” she said.

“For some of our kids, they were super confident, while for others, it was their first competition,” he said. “They will be able to build off this competition.”

“It is good for everyone to work in different settings,” he said. “Some of these guys have not welded indoors before. It is good to see what type of equipment is available to them.”

Pesak said TSTC was the perfect choice for the first West Texas competition and thanked everyone for their efforts.

“This competition was done right, and that is thanks to everyone at TSTC who helped organize it,” he said. “The heart of the hospitality was provided to us.” 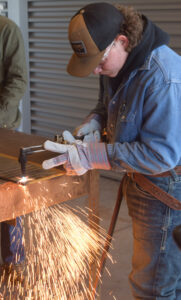 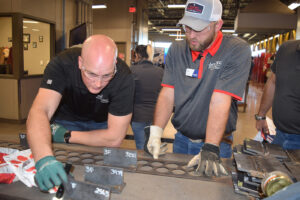