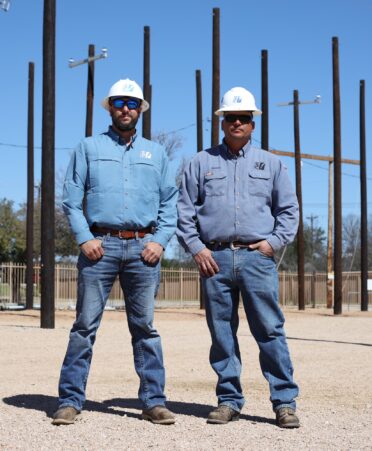 (WACO, Texas) – For Texas State Technical College alumni Justin Lewis and Marshall Verette, there is nowhere they would rather be than working for Pedernales Electric Cooperative (PEC) based in Johnson City.

Lewis is a technical services technician based in Johnson City, and Verette is a regional operations supervisor based in Marble Falls.

“A cooperative is a great place to work for because you are serving the members,” Verette said. “Cooperatives are down-to-earth. The people you meet are awesome. I believe there is more value in a cooperative.”

PEC uses more than 23,000 miles of power lines to serve more than 1 million Texans in 24 counties.

Lewis is a graduate of TSTC’s Electrical Power and Controls program, while Verette studied in TSTC’s former Telecommunications program.

Lewis said each week starts with a meeting focusing on safety and what work needs to be done. Lewis said it is hard to find people with the right combination of technical and testing experience. He said people should consider the electrical field because of the benefits and job security.

“You have got all the training to make you feel safe about your job,” Lewis said. “I feel like the people I work with are like family.”

Lewis grew up in Harker Heights and is a graduate of Harker Heights High School. After high school, he did residential electric work. He later joined the U.S. Marines before attending TSTC, where he used the GI Bill to pay for his education.

“It afforded me an opportunity in the electrical industry,” Lewis said. “I enjoyed the hands-on training, and the instructors were eager to teach you. I’m grateful for where it got me.”

Lewis said he enjoyed learning about the foundations of wiring through TSTC’s hands-on classes.

“It just kind of fell into place,” he said. “I knew with prior manual labor and working in the field that it was my place instead of an office.”

Verette manages a crew of six people. In addition to maintenance work, the group makes new electrical connections by running wire, installing poles and putting in transformers. The work is done for both commercial and residential customers.

Verette has had the opportunity to travel to Bolivia and Haiti to do electrical work, and also to Florida to assist in power restoration after Hurricane Irma. His trips have been coordinated through the National Rural Electric Cooperative Association.

“I love turning the power on and making people happy,” Verette said.

Verette said there is a need for electrical lineworkers not just at the cooperative, but nationwide. According to the electric cooperative, engineers and control center operators are also in need.

“We are unique, and we are the bread and butter,” Verette said. “We are the ones keeping the lights on.”

Verette grew up in Lampasas and graduated from Belton High School. After high school, he did linework and had friends who attended TSTC, which he also decided to attend.

“I enjoyed telecommunications,” he said. “They taught a lot, and it was hands-on.”

PEC annually awards $100,000 in scholarships to graduating high school students in the service area to use at any accredited higher education institution, whether it is academic or technical-based. Scholarships are made possible through unclaimed member funds. The cooperative also offers college scholarships to qualifying adult members.

For more information on Pedernales Electric Cooperative, visit pec.coop and for a list of job openings visit jobs.pec.coop.

Registration for TSTC’s fall semester is underway. For more information, go to tstc.edu.