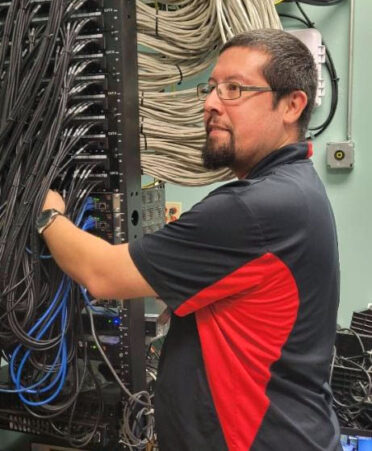 (HARLINGEN, Texas) – Having the expertise to maintain a computer network system is a major responsibility.

For Texas State Technical College alumnus Joseph Rizo, he piqued an interest in computer networking during his early teenage years.

“I have been building and breaking down computers since I was in middle school,” Rizo said. “The electronic aspect of alternating and direct current, and seeing the issue resolved is rewarding to me.”

The Harlingen resident earned an Associate of Applied Science degree in Computer Maintenance Technology (now Computer Networking and Systems Administration) from TSTC in 2018.

The next chapter of his life would transition him to Horizon Montessori Public Schools in Harlingen. He accepted a job as an information technology support specialist. A position he has held for four years.

“Much of what I learned at TSTC carried over into my job,” Rizo said. “My duties are to support the staff with technology such as laptops, desktops, printers and the organization’s webpage. I also assist with email distribution and development. That consists of setting up an email for a new hire or an individual who is departing.”

Rizo said his experience with Horizon Montessori Public Schools has been gratifying.

“When new teachers come on-board, I introduce myself and inform them about which technology-based items are needed,” he said. “I also contribute by directing them to the payroll department. It provides them with a peace of mind.”

Rizo added the work culture at his place of employment has been splendid.

“The spectrum of my duties is always different,” he said. “Every day is never the same.”

Ana Smith, principal for Horizon Montessori III in Harlingen, said Rizo is an excellent asset to the school for any technological issue’s teachers may have.

“Joseph’s ability to manage webpages and create an entire website has contributed greatly to the communication we have with the public schools’ stakeholders,” Smith said. “During the pandemic, he was also well prepared to handle the transition to online learning. He immediately created a network of electronic devices for nearly 400 students.”

Rizo credits his career success to the education he learned at TSTC.

“The instructors made it inclusive, interesting and career relatable,” he said. “Each course pertained to a real-world experience. They are teaching based on their industry experiences. They opened my perception to the various career options available such as education, broadcast television and the banking industry.”

TSTC offers completely online training for its Computer Networking and Systems Administration program. Students can choose to pursue an Associate of Applied Science degree in Computer Networking and Systems Administration, certificates of completion in IT Support Tier 1 and II, an advanced technology certificate in Cloud Computing,] and an Occupational Skills Achievement Award in Entry IT Support.