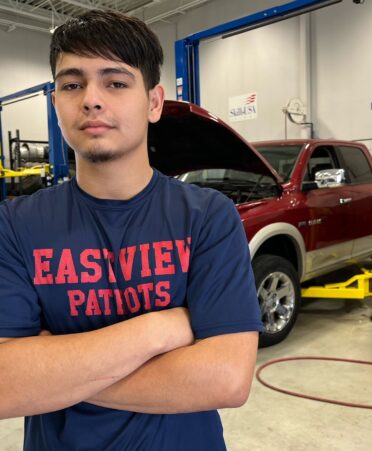 (WACO, Texas) – Juan Mijarez of Georgetown, is excited about the transitions going on in his life now.

“I like to see what today will bring me and what challenges I will face,” he said.

“I’m going to be graduating and working full time and starting off somewhere I never thought I would be,” Mijarez said.

When Mijarez walks across the stage on April 30 at The BASE at Extraco Events Center in Waco, it will mark another family achievement for him. Not only is he the first in his family to have graduated from high school, but he will be the first to graduate from college.

“I am just trying to set an example and make my parents proud,” he said.

Mijarez has accepted a job at Bluebonnet Chrysler Dodge Ram in New Braunfels. He will start as a shop assistant and work his way up to becoming a technician. He plans to start in early summer.

Mijarez received his job offer in early April at CarFest in San Antonio. He was among a group of TSTC’s Automotive Technology students from the Waco campus working at the event to repair vehicles for people in need of help.

“It was really fun,” he said. “If I had the chance, I would do it again. I enjoyed meeting the other Automotive Technology students.”

CarFest had a career event for the first time that featured representatives from San Antonio-area dealerships interviewing graduating students in a round-robin format. Mijarez was one of the students doing job interviews during the event. He received assistance from TSTC’s Career Services office to improve his resume ahead of the trip.

“He told us he got the job offer and he accepted it,” Mills said. “That was pretty exciting for us.”

Mijarez was born in Illinois, with his family living in other parts of the country before settling in Georgetown. He grew up with an interest in automobiles through television, movies and video games.

“It is very different, but I like cars, and I like to work on them,” he said.

Mijarez is a graduate of East View High School in Georgetown. He had already been taking automotive classes when TSTC recruiters visited his school.

During his time at TSTC, Mijarez worked at a Chrysler Dodge Jeep Ram dealership in north Austin. The practicums helped fulfill the certificate requirement to work at a dealership and get real-world experience.

“I like my job where I’m at right now,” he said. “It’s in a good area with good people, and they do good work. But, moving to a new area is what I’m looking forward to.”

Mijarez said his goal in 10 years is to own a house and be the best automotive technician he can be.

“I want to be good and be happy with what I do,” he said.

For more information on CarFest, go to carfestsa.org.