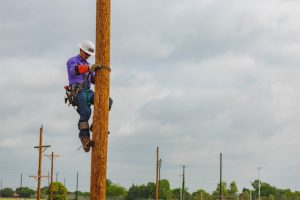 Mitchell said he considers this work a paid field trip for students, giving them work experience that will prove valuable as they pursue their careers in the electrical lineworker industry. He said many of the students made at least $3,000 for their work during the winter storm.

Mitchell volunteered to serve as a damage estimator for 13 days, while TSTC Electrical Lineworker Technology student Conner Woodall of Hubbard was his driver. The two worked from the Austin suburbs to the Dallas-Fort Worth area to East Texas. Mitchell said the Lufkin and Nacogdoches areas were heavily impacted.

“It was the tree situation,” Mitchell said. “There were big pine trees hanging over the lines. There were bad ice storms where limbs accumulated a half inch of ice. The limbs fell and broke lines and broke poles on a big scale.”

Woodall said he saw lots of downed power lines and worked with Mitchell to prepare job tickets to get damaged circulators and insulators fixed. He said the weather was the coldest he had ever endured.

“We have to get out and know what to look for,” Woodall said. “If you cannot get to it by truck, you are going to have to walk the line.”

He said it is the first time he has done work like this in the field. He said the money he earned will go toward college costs and to buy more equipment.

“It actually benefited me being able to see a lot and see real life,” Woodall said. “I saw what the crew would have to do to come out and do the work.”

Mitchell said TSTC’s Electrical Lineworker Technology program is called on to provide assistance during major weather events one or two times a year.

TSTC offers the Electrical Lineworker Technology program at the Fort Bend County, Harlingen, Marshall and Waco campuses. TSTC’s Electrical Lineworker Technology program is a Money-Back Guarantee program. Students who sign up for the program with a TSTC Career Services representative in their first semester of study can take part in focused workshops as they work their way to an associate degree. If students do not get a job in their degree field within six months of graduating, TSTC will refund their tuition.

Texas had more than 10,000 electrical power line installers and repairers in 2019, according to the U.S. Bureau of Labor Statistics. Those workers made an annual mean wage of $58,570.

Nationally, more than 116,000 electrical power line installers and repairers will be needed by 2029, according to the federal agency. This is due to retirements, workers advancing into management positions, new housing and commercial construction, and upkeep of the interstate power grid.