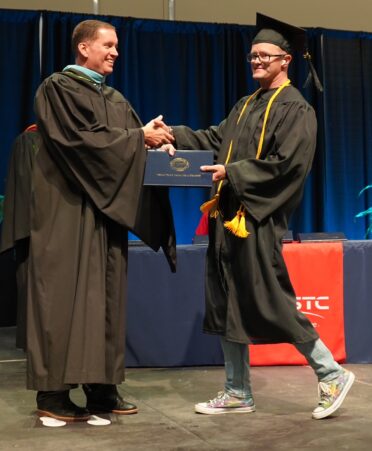 Davis, who has autism, completed an Associate of Applied Science degree in Heating, Ventilation and Air Conditioning Technology last spring but chose to walk across the stage at the ceremony.

“I don’t like big crowds, but my mother and everyone would like to see me do it,” he said.

Kimberly Davis, Kenneth’s wife, said she was happy to see him take part in Commencement.

“I’m proud of how hard he worked to go to school at TSTC,” she said. “Despite his struggles, he didn’t give up.”

Davis beat the odds in getting his education at TSTC.

In Davis’ case, he received a GED in the late 1990s and entered TSTC as a nontraditional student.

Davis said one of the most important things to remember about autism is that the people who live with it daily are trying their best to connect with people.

“These people want to work and have jobs and have lives, but they have struggles,” he said.

Davis is a service technician at Capstone Mechanical in Waco. He drives a company van for service calls, diagnoses problems and makes repairs on-site.

“I pay more attention than most people,” he said. “I have been told that my attention to detail is really good.”

Davis began working four years ago at Capstone Mechanical but eventually wanted more challenges there. He learned that if he wanted to switch departments, he needed to go to college.

“I’m a lot better at using my brain than my hands sometimes,” he said. “I don’t like doing the same thing over and over every day.”

Davis said he enjoyed learning new skills in TSTC’s HVAC Technology program labs and then applying them at work.

“I love figuring out what the problems are,” he said.

“His work ethic was staying busy,” Snyder said. “He was very studious.”

As Davis took classes, he also found a talent that he never knew he had: painting. He was inspired by looking at artwork at his doctor’s office and watching a video on TikTok. He began painting on March 8, 2020, and selling his works shortly thereafter.

“My art is my communication with the world,” he said.

Davis said customers pick the colors, and he designs the abstract works. He said he does not want to be famous for his art, but he dreams of his art being displayed in public places for all to see.

Davis said he could not have finished at TSTC without the help of the on-campus Access and Learning Accommodations and Counseling offices.

Shelley Hall, an ALA representative at TSTC, met Davis in fall 2018.

“I’ve watched him struggle and push through different problems with instructors and persevere,” she said.

TSTC students who have a disability of any kind can visit the Access and Learning Accommodations office for free guidance on handling their classes. The office is guided by the Americans with Disabilities Act and Section 504 of the Rehabilitation Act of 1973.

Hall said documentation from a medical professional is helpful. She said the curriculum is not changed for students, but assistance such as extra time to take tests can be worked out with instructors.