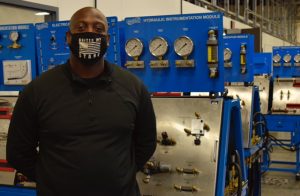 TSTC graduate returns to teach in the Industrial Systems program

(RED OAK, Texas) – Jarriet Durham is fascinated by electricity. And he is eager to instruct as many people about it as possible.

Durham began teaching in the Industrial Systems program at Texas State Technical College’s North Texas campus in December 2019. Initially he was looking for a second job since he was already working in the industry. What he thought was an offer to teach part time was actually a chance to join the program’s faculty as a full-time instructor.

“I feel like, as an instructor, we look at it as teaching. But on the other side, you are a lifelong learner,” Durham said.

During the spring semester, he is teaching some of the program’s day classes.

“His enthusiasm for what he does each day is very easy to see,” said Marcus Balch, provost of TSTC in North Texas. “Jarriet, or J.D. as we call him, could be out in industry still, but he’s come back to a technical college and a program that he is a graduate of. The work that he does daily directly impacts the lives of his students, giving them a very sought-after skill set that is critical for our industry partners.”

Durham said he sees a challenge in educating others in what industrial systems are. He said there is a big need for women and minorities to pursue the field.

“It is such a varied field,” Durham said. “We touch on some of everything. We teach heating, ventilation and air conditioning; electronics; electrical; mechanical; pneumatics; hydraulics.”

Les Monk, an instructor in TSTC’s Industrial Systems program, admires Durham’s attention to detail — something that he first noticed when Durham was one of his students.

There is something else that Monk noticed early on: Durham’s love of motorcycles. Monk said Durham rides to and from campus occasionally on a motorcycle.

“He’ll ride it when it’s cold outside,” Monk said.

Durham grew up in Dallas and is a graduate of H. Grady Spruce High School. After high school, he joined the U.S. Air Force, where he worked as a postmaster and radio operator.

“Some of the soft skills transfer when you manage a post office,” Durham said. “In my role, I had clerks under me. I am not completely new to it (teaching) in an administrative role.”

After he left the military, Durham worked in construction and studied to be an electronic systems technician.

“I was not making the money I wanted to make in construction and decided to go to TSTC,” Durham said. “I wanted to do work on electrical systems. I was doing some research, found out about TSTC and gave them a call. And the next thing I knew, I was enrolled and going to school.”

Durham graduated in 2019 with an Associate of Applied Science degree in Industrial Systems – Electrical Specialization from TSTC in North Texas.

During the month of February, TSTC wants to honor the Black students, staff and faculty who make TSTC a special place to learn.