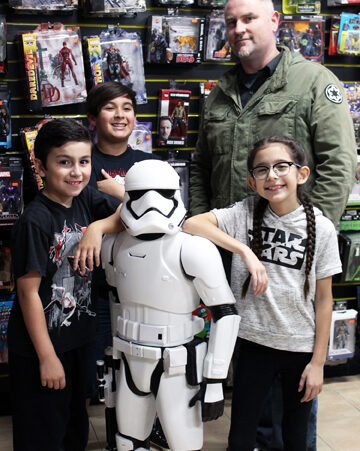 (HARLINGEN, Texas) -Graphic designer by day and toy photographer by night, Adam McGrath is sharing his skills with younger generations throughout the Rio Grande Valley.

The lead graphic designer at Texas State Technical College grew up in Melbourne, Australia, a place he calls art central.

“I grew up enjoying graffiti art and drawing, and putting my creative eye to work to make a few dollars. Art is big in Melbourne and encouraged,” said the 46-year-old. “But I never knew I could turn what I love into a career until my late twenties.”

McGrath was 29-years-old when he earned his associate degree in graphic art from Royal Melbourne Institute of Technology after completing a apprenticeship as a desktop publisher.

“This apprenticeship is when I knew art is what I was supposed to be doing,” said McGrath. “So I found my own path, my family wanted me to study computer science, but I pursued my passion.”

And art wasn’t the only thing McGrath was passionate about, he was and still is an avid Star Wars fan collecting action figures by the hundreds. These action figures are what have set up McGrath’s life.

“I wanted to expand my horizons and have new experiences, so I sold my first Star Wars collection for $3,000 and that purchased my ticket to the U.S.A.” he reminisced.

Fortunately for him, Star Wars action figures were less expensive in America and he was able to begin growing his collection again, because now children are reaping the benefits of his career and collectibles.

After working various graphic design jobs for advertising agencies around the Valley, McGrath ended up at TSTC, where he has been the lead graphic designer for nearly six years.

It is here at TSTC, where his curiosity for social media peaked and he knew he had to learn more.

So he began putting his Star Wars action figures to good use and started dabbling into toy photography, gaining inspiration from the hundreds who already saturate social media and never expecting he would grow his Instagram page, “The Chip Monsters,” following from 10 to close to 23,000 people.

“Toy photography happened by accident, but the toy photography is very welcoming. There’s no competition, just learning from one another and helping each other out,” said McGrath. “I have learned so much from the folks I’ve met through Instagram, and that has allowed me to grow as a photographer and a creative.”

McGrath’s photos have been featured at the South Texas Comic Con and have been published in England magazines and high profile, influencer Instagram pages, earning thousands of likes.

And since his hobby has become a second career for him, he decided he wanted to share his skills and knowledge with younger, like-minded, generations.

“I’ve been told that I’m dumb for taking pictures of toys and liking books about font and art, but I love it and I don’t want my kids or other kids to grow up thinking that what they enjoy and love is weird or dumb,” said McGrath. “Every child has the access to art with crayons and coloring books, but it’s society that takes away the love of art.”

So the father of two young boys set out to create photography workshops for children between the ages of four to 18, so they too could pursue their passion. All of the photography is done with smartphones.

What started as small pop-up workshops in McAllen are now a series of one-hour Saturday workshops that have anywhere from 15-40 children in attendance, with workshops also offered in Harlingen on occasion.

McGrath said it is because of the support he has received from friend and McAllen comic book store owner Ramsey Ramirez, that he is able to have a location to host these workshops and classes for the children of the RGV.

“I’ve had a great response from children and their parents,” said McGrath. “Some parents are so happy that they have found an outlet for their child who enjoys taking photos and making videos, and a place. Where they’re understood and supported.”

“I want my kids and these kids that I’m teaching to embrace their love for art, which can encompassed into so many fields they can grow up to be successful in,” said McGrath. “I don’t want their love to be diminished, I want it to be supported. And if I am that support, then I have done my job and that’s enough for me.”