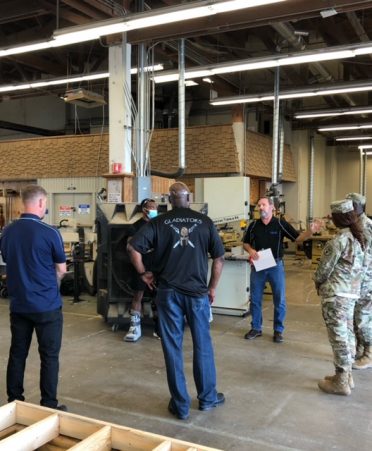 The SRU enables military personnel who are ill, injured or wounded to prepare to transition back to civilian life, said Kenneth Buford, TSTC’s statewide director of veteran recruitment.

The goal of the visit was to show the soldiers an option for a cost-effective, quick way to secure an education and move into a great-paying, in-demand job. The soldiers were divided into three groups matched to their interests. Among the programs they visited were Automotive Technology, Avionics Technology and Building Construction Technology.

“When you leave here, I want you to go to work,” David Murphy, an instructor in TSTC’s Precision Machining Technology program, told one group of soldiers. “We don’t get paid until you get a job.”

Sgt. Larinso Morgan, a member of the Louisiana National Guard, has been at Fort Hood for two months recovering from injuries he received during a deployment to Iraq. He is also taking online bachelor’s degree-level business and construction management classes offered by Louisiana State University.

Morgan grew up working alongside his father, who is a carpenter, and has also received experience in the Army as a horizontal construction engineer. He considered his visit to TSTC a great introduction not only to the Building Construction Technology program, but also to other technical fields he had not considered.

This is the third time an SRU group from Fort Hood has toured campus since last fall.

Also on Thursday, board members for Workforce Solutions of Central Texas in Killeen were introduced to various technical programs during a campus tour that included lunch.