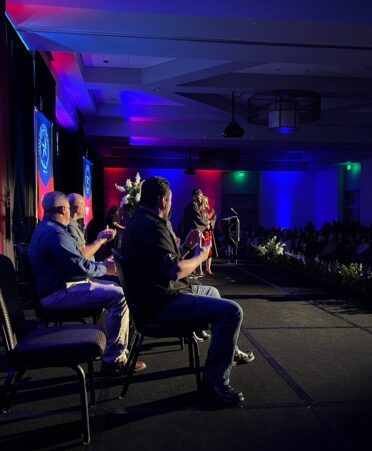 Hunter Henry, a Career Services associate at the East Williamson County campus, said 70 percent of the graduating class already had jobs in their career fields.

“I felt very accomplished,” she said. “My goal was to get a job before I finished school.”

Taylor said she enjoyed being part of the Welding Technology program.

“I was the only girl in our night classes,” she said. “I was initially worried. I love that we have so many female instructors. It made me feel good about my career choice.”

Wesley Jennings, of Georgetown, received an Associate of Applied Science degree in Industrial Systems – Mechanical Specialization. He is transitioning from his fall paid internship into a full-time mechanic job at ICU Medical in Austin, which he begins later this month.

“I like to know a little bit of everything,” he said. “Industrial Systems touches on all aspects of the industrial world.”

Jennings said he will miss the learning atmosphere his program had.

“They (the instructors) want to see you succeed so badly,” he said.

Some graduates are still on their job hunt.

Tyler Stromsness, of Hutto, received an Associate of Applied Science degree in Precision Machining Technology, He wants to stay in the area to work.

He said he chose his field of study because he likes to be hands-on.

“I will miss the people at TSTC,” Stromsness said. “I have made good friends here. I will miss my instructors as well.”