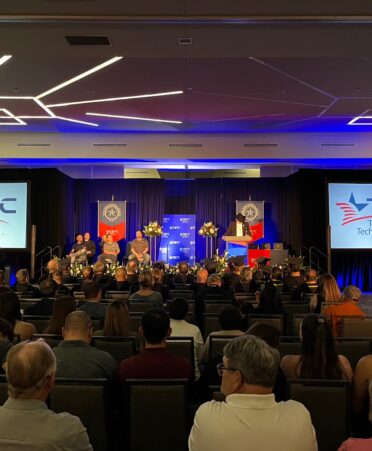 Adams said she admired the students’ persistence in finishing their studies.

The Provost’s Outstanding Achievement Award was presented to Michael Vidal, of Round Rock, who received a certificate of completion in Culinary Specialist. He said he grew to enjoy baking as he progressed in his classes. Vidal commended Brian Bohannon, an instructor in TSTC’s Culinary Arts program, for dispensing so much knowledge to him.

Vidal said his career goal is to open his own restaurant.

Jose Castillo Jr., of Georgetown, received a certificate of completion in Structural Welding.

“I have a lot of cousins that weld,” he said. “I got into it in high school.”

Castillo said he enjoyed learning new welding skills at TSTC beyond what he already knew. He said the faculty in TSTC’s Welding Technology program are good at what they do.

Castillo is working at Cruz Custom Metal Design in Taylor.

Some students are continuing their job hunts.

Jaiden Martinez, of Georgetown, graduated with an Associate of Applied Science degree in Welding Technology. He said he is the first on the Martinez side of his family to graduate from college.

“I feel really proud,” he said.

Martinez was influenced to pursue welding because of his stepfather, who welds as a hobby. He said he chose TSTC because it was close to home and offered job placement opportunities.

“I will miss the awesome machines they have and the instructors as well,” Martinez said.