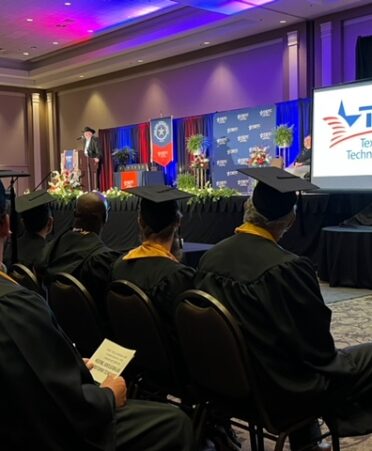 Marcus Balch, provost of TSTC’s North Texas campus, said he was excited for the graduates. He said the graduation ceremony was the first time that TSTC’s industry partners were recognized representatives on stage. Companies that were represented were Bombardier Inc., BrassCraft Manufacturing Co., Gerdau Midlothian Steel Mill, Oncor and Texas Instruments.

Balch awarded the Provost’s Outstanding Achievement Award to Agustin Torres, of Dallas, who received a certificate of completion in Diesel Equipment Technology – Heavy Truck Specialization. Torres said he was surprised when he received the recognition.

“I will miss the education and knowledge (at TSTC),” Torres said. “You learn something new here every day.”

McKenna Eddie, of Arlington, received an Associate of Applied Science degree in Electrical Power and Controls. He works in Oncor’s metering services department in the Dallas-Fort Worth area.

Eddie worked in nanotechnology before coming to TSTC, where he previously earned an Associate of Applied Science degree in Industrial Systems – Electrical Specialization.

“I will miss the instructors,” he said. “They take their time and help you learn every bit of the material.”

Brandon Martinez, of Ennis, received a certificate of completion in Electrical Construction that he completed at TSTC’s Waco campus. Martinez began working at Leland Collier Electric Co. in Red Oak before he started classes at TSTC.

Martinez said he chose his program of study because his father and uncles are electricians.

“It (the electrical field) is something challenging with new obstacles,” he said. “You use your brain and figure out the best solution that will cost the company less and be more efficient.”

Some students are continuing their job hunts.

Jesus Leal, of Irving, grew up around farm equipment as a child in Stephenville. He received a certificate of completion in Diesel Equipment Technology – Heavy Truck Specialization.

He studied welding at another college before coming to TSTC. This time, learning was different for him.

“I learned a lot,” Leal said. “Now I was picking up the material easier and was familiar with it.”