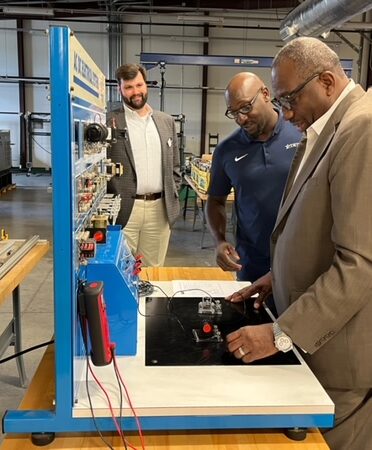 West said he enjoyed learning about the educational and industry collaborations in which TSTC is involved.

“We need this type of expertise,” he said.

West learned about the smart grid trainers and programmable logic controllers that students use in the Electrical Power and Controls program.

“I think they (West and his staff) thought it was informative,” said Russell Harris, an instructor in TSTC’s Electrical Power and Controls program. “I think they enjoyed learning what our program does and the work and technology we use.””

West did a short hands-on demonstration in the Industrial Systems program. The senator used pictorial diagrams and schematics to build a push-button series circuit.

West learned about TSTCYou, which meets students where they are through a flexible, performance-based education (PBE) model that works with busy schedules. Students in the HVAC Technology program began their second year of PBE when the fall semester began last month.

In PBE, students work with an enrollment coach to develop a schedule in two time blocks. Lectures, videos and other learning content is on Canvas, a learning management system. Instructors also do mini-lectures during the day, with tests being demonstration-based, either online or written.

West visited the on-campus Bombardier Aviation Apprenticeship Program, which trains residents to work at the Montreal-based aviation company’s Red Oak facility. Groups train for 90 days in a special company lab at TSTC and undergo 90 days of on-the-job training at the company. The program is registered with the U.S. Department of Labor.

Jim Pitts, a former state representative and the namesake for TSTC’s Industrial Technology Center in North Texas, said he has known West for about three decades.

“It means a lot to me that he would come and support TSTC and what we do here,” Pitts said. “I want everyone to know about TSTC in North Texas.”

District 23, which the senator represents, encompasses a portion of Dallas County and Tarrant County.