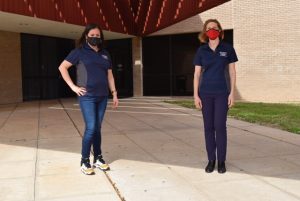 (WACO, Texas) – It is a woman’s world in Texas State Technical College’s Office of Information Technology. Sixteen women work in a range of roles statewide to keep the college functioning, from serving as applications administrators to help-desk technicians.

Gladia Escobar and April Falkner have roughly three decades of combined service to TSTC. Both are based in Waco, but their work touches all of TSTC’s 10 campuses.

“One of the things I learned about Gladia and April is that they aren’t afraid,” said Shelli Scherwitz, TSTC’s executive vice president of Information Technology Support Operations. “These two are never afraid of identifying the hard issues and work with the team to resolve them.”

Escobar is a technical consultant who works to approve software and hardware for the college. She has been at TSTC for eight years, having started on the help desk giving advice to employees regarding technical issues. She keeps up to date on information technology’s evolution by watching YouTube videos and reading on Reddit.

“I really love what I do,” Escobar said.

Some of her favorite pieces of education technology are the clear-touch interactive displays that are starting to be used in some of TSTC’s labs.

“I hard-wired a DVR (digital video recorder) with four cameras mounted,” Escobar said. “I like looking and seeing what is going on.”

Escobar became interested in information technology when her family got their first home computer when she was young. She spent time downloading music and burning compact discs.

Escobar took dual enrollment classes in drafting and design at TSTC while she was a high school student. She went on to earn three information technology-based associate degrees at TSTC’s Waco campus.

Going to TSTC runs in Escobar’s family. Her two younger sisters have graduated from TSTC, and her son is planning his return to studies at TSTC’s Waco campus.

Falkner is TSTC’s lead Colleague programmer and analyst. Colleague is the software system that runs the business side of TSTC, from billing to student registration. She also develops custom programs written specifically for TSTC that Colleague does not provide.

“I like solving problems, and also I like the fact that what I am doing is helping someone else do their job better or make it easy for them,” Falkner said.

A major project for her now is the college’s conversion in early 2022 to Workday, a cloud-based software.

“Right now, we are in the middle of implementing the software for the human resources and finance offices, and once that is implemented, then we will start on the students’ system in Colleague and move it to Workday,” Falkner said.

Falkner has worked in TSTC’s Office of Information Technology since 2000 and has been in her current role since 2015.

Falkner grew up in Odessa and cites her mother as being an inspiration for her pursuing the information technology field.

“I kind of thought I would like to get into computers and started doing that,” Falkner said. “When I graduated from high school, I decided to pursue that at Odessa College. I started taking programming classes. One of my instructors recommended me for the job there at the college in programming. I started to work there actually before I got my degree.”

“Women bring special skills to the IT field,” Scherwitz said. “Men and women see things differently, and this diversity brings new solutions to the table when resolving problems. The technical field is growing each day, and it needs women to help it grow. It is a tremendous opportunity for those who are willing to grasp it.”