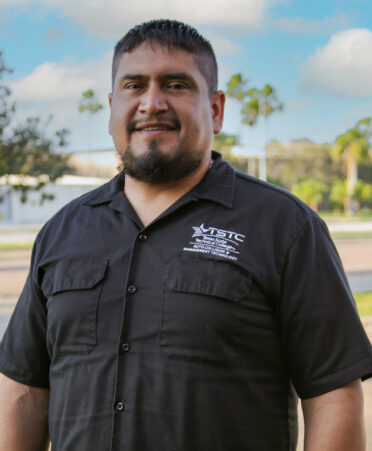 (HARLINGEN, Texas) – Texas State Technical College Auto Collision and Management Technology instructor and program director Jose Vasquez has made a profound impact not only on his students, but also as a coach and mentor outside of his job at TSTC.

Vasquez has coached area youth in the nonprofit Los Fresnos Falcons Little League, where he is also board president, for 10 years. He has also coached basketball, flag football, soccer and volleyball at the Boys and Girls Club of Los Fresnos for two years.

He said his purpose was to give back to his hometown and spend quality time with his children.

“For me, it was important to see the area youth succeed in life — especially my four children,” he said. “My goal has been to help the Little League players enhance their athletic skills and translate that into school. As for my children, I wanted to help build their sportsmanship skills.”

Vasquez said mentoring youth can be instrumental in their development and success.

“As a Little League coach, the players rely on my knowledge when they are on the playing field,” he said. “The greatest tool I offer is telling them that they can succeed. That is a significant component in their development that will lead to positive behavior. In turn, it leads to a great education, staying out of trouble, and dependability. These characteristics can make them successful.”

Vasquez said many parents have expressed gratitude for his mentorship of their children.

“The parents have said they are impressed with the skills that their children have developed,” he said. “It gives me a great sense of gratification as a coach and mentor.”

One such parent is Claudia Rocha, of Los Fresnos. She said Vasquez is motivational.

“He has mentored my son for years,” she said. “His patience and dedication with all the age groups is admirable. He is transparent and dedicates himself to helping the children improve their craft.”

George Martinez, a Los Fresnos resident whose child participates in the Little League, said Vasquez is a person of great character.

“He’s dependable and an excellent coach and mentor for the children,” Martinez said. “The first time my son joined his team, they had the best record throughout the season.”

January was proclaimed National Mentoring Month by President Biden in December 2022. The proclamation states: “Every January, our Nation celebrates the dedicated mentors whose wisdom, guidance and positive examples set our children on a sound path and help prepare them to succeed.”