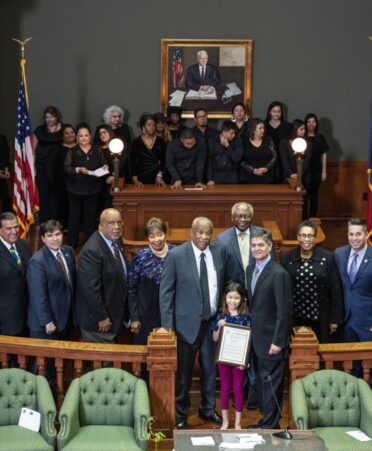 (HARLINGEN, Texas) -When Sessia Wyche III is teaching and leading ministries he is changing lives, and for these contributions and more to the Rio Grande Valley, the Texas State Technical College Mathematics instructor was recently presented with a House of Representatives Congressional Record recognition by U.S. Congressman Filemon Vela.

“When I received the call about receiving this honor I felt like it was the milestone of my life,” said the 73-year-old Bay City native. “Everything I’ve done is a calling from the Lord. My calling is to teach. I do what I do because I love it, not because I expect anything in return.”

A Congressional Record is the official record of proceedings and debates of the United States Congress and is published daily when congress is in session. Wyche was recognized during a Black History Month Celebration.

Wyche was one of 12 other community leaders honored.

The Congressional Record of proceedings and debates of the 116th Congress, recognized Wyche for his contributions to the state’s  34th Congressional District; it reads:  “He is a dedicated educator in the Rio Grande Valley…He is a role model for our children and we are thankful for his compassion to serve those in need.”

“I am thankful I had the privilege of highlighting and honoring Sessia as an upstanding member of the community,” said Vela. “His commitment to community through education, service to others and unyielding faith serves as a shining example of the people that make up our great community.”

Wyche began his teaching career at TSTC in 1982, back when it was Texas State Technical Institute, after a four-year stint with Southwestern Bell as a programmer.

And with a bachelor’s and master’s degree in mathematics, physics and computer science from Texas A&I University, now Texas A&M – Kingsville, it was only fitting he teach younger generations the art of math.

He was with TSTI for five years before transitioning to a local university where he spent 22 years teaching before retiring.

Upon retiring, Wyche decided he was not done and returned to TSTC. He has now been with the college since 2009.

“Every morning I wake up and pray that the Holy Spirit fills me as I teach and that my students understand what I am teaching them,” said Wyche. “It’s a great feeling when I see my students’ eyes light up when they get it. That’s what makes this job fulfilling. The key is to stay positive.”

In addition to being a long-time educator, Wyche also uses his spare time to play dominoes every night, but most importantly, minister to those in need.

Since 2004, Wyche has led a prison ministry in Raymondville twice a week, at the juvenile detention center in San Benito every Thursday and has served as a volunteer chaplain at Valley Baptist Medical Center and Harlingen Medical Center.

“In the bible there is a verse, ‘Go therefore…teaching them to observe all things that I have commanded you,’ and reading this I knew serving others was my purpose,” said Wyche. “Serving others has been such a blessing. I live to serve.”

After a prostate cancer diagnosis in 2012, he was forced to slow down, but said it was through Psalm 1:18 – “I shall not die, but live, and declare the words of the Lord,” that he found healing and continued his work. Wyche continues to remain cancer free.

“My faith keeps me going, but so does my family,” he said. “I would not be able to do anything without the support of my family. My wife, children and grandchildren keep me going. A lot of what I have accomplished is because of them.”

Through the years Wyche has received numerous awards and promotions for his success as an instructor and professor, but said he credits a life-changing moment when he was 12, for who he has become.

“If you’re blessed, you bless others. And as a young boy, who attended a segregated school, I didn’t even have two cents for a chocolate milk,” he said. “But while cutting wood to build a fire for my family, a man stopped, observed my work and gave me 25 cents. I was the happiest boy because I could now afford chocolate milk. And since that day I knew I would help others the way this man helped me.”