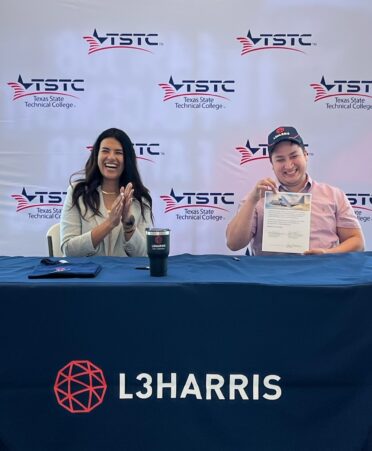 Ryan Becerra, of Waco, is scheduled to begin work in mid-May as an electrical assembler in the company’s avionics manufacturing department in Waco. Becerra is a candidate for graduation with an Associate of Applied Science degree in Avionics Technology at TSTC’s Spring 2022 Commencement on Saturday, April 30, at The BASE at Extraco Events Center in Waco.

“I’m very excited (about the new job),” Becerra said. “I will take what I learned here and apply it there.”

“He is deliberate and thorough in his work and achieves great results with remarkable efficiency,” Segraves said. “He can rapidly flex from simple, mundane tasks to complex problems requiring higher-level thought. He is truly a highly versatile technician.”

“He was impressive during that conversation,” Beach said.

Becerra grew up in Waco and is a graduate of University High School. After high school, he attended a community college and attempted to join the military. But he said during this time, he wanted to do things better.

“I wanted to be successful and do well for my family,” Becerra said.” I wanted to get in a better position. I was tired of struggling financially.”

He said he did not know much about avionics technology before entering TSTC, but he said he took to what he was learning easily.

“I loved it,” he said. “They (the instructors) make me laugh. They make me work hard. They make it a great atmosphere to learn.”

Becerra kept up a demanding schedule during his time at TSTC. On weekdays, he worked from 11 p.m. to 7 a.m. at a local company, then he went home to eat or take a nap before his morning classes. Whenever his classes ended for the day, Becerra went back home to eat, shower and sleep before he went to work. He did a lot of his studying on weekends but used time during the week to finish projects with deadlines.

The company held its first ceremonial signing ceremony at TSTC in November 2020 for a graduate of TSTC’s Precision Machining Technology program in Waco.

Sara Tatsch, the company’s vice president and general manager of the Modernization and Modifications Group, said its partnership with TSTC is important and needs to be celebrated as quality graduates are hired.

L3Harris Technologies is an international aerospace and defense technology company with employees in more than 100 countries. The company’s Waco facility specializes in aircraft modifications.

For more information on L3Harris Technologies, go to l3harris.com.