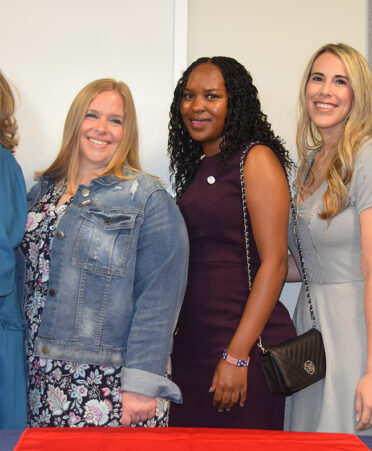 (ABILENE, Texas) – Meeting the challenge of earning an associate degree during a pandemic was celebrated by six Texas State Technical College Nursing students during a pinning ceremony for them and their families on Thursday, April 28.

TSTC Nursing division leader Lisa van Cleave said the graduates will be successful in the health care field for different reasons. But all of the students have one thing in common.

“You have shown that you will not give up on your patients. You will fight for them,” she said. “I know you will do great things.”

To the families, van Cleave said their support was important.

“You were there each step of the way, and for that we are grateful,” she said.

Graduate Terri Rickman, who spoke for her classmates, said a quote by William Arthur Ward summed up their time at TSTC.

Rickman said each graduate overcame personal obstacles and, along the way, learned to ask the right questions.

“The most important follow-up to everything taught has been ‘why,’” she said. “Learning the why of all we have been taught has been the most important. Professional nurses are taught a very wide and very deep knowledge base that has not only to be learned, but understood and applied in a manner that keeps people safe and, ultimately, alive.”

Rickman said she and her classmates learned from the best educators to prepare them to care for patients.

“Nursing is more than having vast medical knowledge or even figuring out those EKG strips,” she said. “It is taking all of those things, adding a million more things, understanding them, and then applying the nursing process safely to each individual situation. Being allowed and trusted to actively participate in the care of another individual in their most vulnerable moment is an honor.”

Rickman said it is a good feeling knowing that her classmates can now be called colleagues.

“We started a journey together, and today all of our hard work and dedication can be celebrated,” she said. “We have all worked so hard for our new title of associate degree graduates. We will no longer be fellow students, but will now be colleagues in the great profession of nursing.”

The need for registered nurses in Texas is forecast to increase 17 percent by 2028, the website stated.