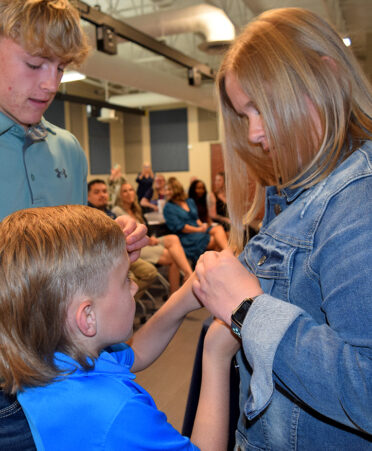 (SWEETWATER, Texas) – When it was time to choose who would join her at the recent nursing pinning ceremony at Texas State Technical College, Kenna Logan knew it would be the most important people in her life.

“I could not have done it without my sons,” said Logan, who received an Associate of Applied Science degree in Nursing from TSTC last month. “They were my strength that kept me going throughout school. They were proud to join me during the pinning ceremony.”

Her sons often encouraged her when she hit a low point while studying.

“They would be there for me after every test and every clinical session,” she said. “I wanted to show them that they can do anything if they try.”

Logan knew she wanted to build on her vocational nursing degree, which she earned 15 years ago. But many life challenges prevented it. The last two years, she said, were the best time to go back to school.

“So many things happened, from having two boys, moving to Germany and coming back,” she said. “This is a dream come true for me to earn this degree so I can continue to help people.”

“I was working full time, and I was a full-time mom,” she said. “I hope that my success will give someone else hope and show others they can do anything. That is what I wanted to show my two sons.”

Logan said her education will not end but will no longer be in a classroom setting.

“I know I will have a lot to figure out,” she said. “I was exposed to so much during my clinical work. We covered safety during a pandemic and how to protect people around us.”

She will take the knowledge that she obtained to her job with Moody Neurorehabilitation Institute, which offers personalized care to treat the challenges of brain injury.

Instructor Lisa van Cleave knows that Logan will be successful.

“She is an influential person who always pursues her dreams while never looking back,” she said. “I know she will achieve all of her goals in nursing.”

However, Logan said a talk with one of her doctors pushed her during one of those days she was thinking about pulling away.

“At one point, I was thinking about quitting nursing,” she said. “The doctor I was working for told me he would not let me do that. He said I had the compassion to help others. I am glad he saw the best in me, and others have as well.”

Logan said having passion for something is what she wants to pass on to her sons.

“They motivate me to do the best I can, and I want to be there to show them we can succeed,” she said.

The need for registered nurses in Texas is forecast to increase 17% by 2028, the website stated.