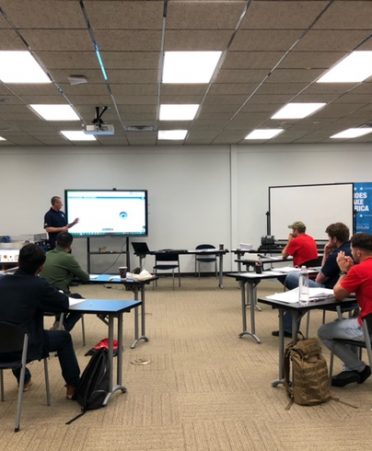 “We are extremely happy to be able to give back in a small way to these guys for their sacrifices,” said Adam Barber, TSTC’s executive director of Workforce Training for the East Williamson County, North Texas and Waco campuses. “It is rewarding.”

The soldiers are taking classes at TSTC’s Waco campus in mechatronics, with the goal of earning up to seven certificates from the Smart Automation Certification Alliance. Classes cover electrical systems, electrical motor control systems, industrial electricity and other topics.

The soldiers are on campus four days a week, with classes taking place from early May to late July.

The classes are being taught by TSTC workforce trainers Eric Schafer and Larry Griffin. A veteran himself, Griffin said he wished a program like this had existed when he left the military.

“TSTC providing opportunities to align these people’s skills to the industrial model is an invaluable asset,” Griffin said.

Aaron Bibb, of Kempner, is a master sergeant planning to leave the Army this fall after 20 years of service. He first learned about the program last September. He said he did not know much about manufacturing, but over time he has learned how it ties into what is taught in the military.

Bibb said maintaining and troubleshooting machinery already happens in the military, from guns to trucks.

“I can say the program is the opportunity people don’t know they are looking for,” he said.

Bibb said the hands-on training the soldiers receive is critical and can build confidence entering the workplace. Program members receive resume writing and other guidance from TSTC’s Career Services office.

“If you don’t get a job out of this program, it means you don’t want one,” Bibb said.

Every Wednesday, employer representatives speak to the students virtually or in person and talk about their need for workers. Barber said some of the participating companies have been Samsung Group and Mars Wrigley Confectionery.

Marvin Branch, a manager at the Manufacturing Institute’s Heroes MAKE America program, said plans are to have three program cohorts start each January, May and August at TSTC.

Career planning is critical for those preparing to leave the military. Branch said about 7,000 soldiers transition each year out of Fort Hood.

“The biggest challenge is soldiers are coming out not necessarily with a degree or a certain certification, but they are coming out with the leadership skills, the soft skills and the discipline to be great employees,” he said.

For more information, go to themanufacturinginstitute.org.