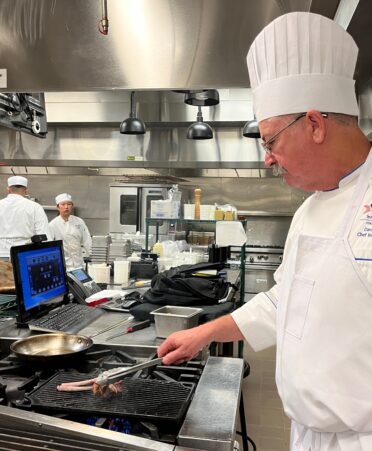 (WACO, Texas) – July is a great time to reignite the thrill for the grill.

This month marks National Grilling Month, a time to celebrate and feast even more on great-tasting fajita meat, hamburgers and other grilled delights.

Grilling is taught throughout the Culinary Arts curriculum at Texas State Technical College’s Waco campus, with students starting early on how to grill mushrooms and peppers. Students advance to working with meats later in the program.

“You need to get the grill to a medium heat,” said David Ray, an instructor in TSTC’s Culinary Arts program. “As you preheat, you need to gently wipe the grill with an oiled rag or a towel.”

Ray said rosemary is good to use with lamb; chili powder and garlic are good with chicken and pork; and salt and pepper are a good combination with beef. He said thickly cut vegetables such as asparagus, cauliflower and squash are great for grilling.

Ray said safety is important when grilling. He said there should be a fire extinguisher close by. If grilling indoors, have the exhaust hood fan turned on. Charcoal briquettes should be built up in a mound and then spread out as they heat up.

The report also said 38 percent of grill owners purchased a new grill in the last two years. According to the report, the top three reasons that Americans grill are for the flavor, lifestyle and entertainment.

Some TSTC students have been grilling since well before they walked through the doors of the college’s Greta W. Watson Culinary Arts Center.

Isaiah Carter, of Elm Mott, took dual enrollment classes in the Culinary Arts program while he attended nearby Connally High School. He is scheduled to graduate next spring with an Associate of Applied Science degree in Culinary Arts.

Carter has been grilling with his family since he was 5 years old. His favorite meats to grill are brisket and ribs.

“Grilling those is something you can’t just go to the store and do,” he said. “It takes practice and patience. Once you know what you are doing, people love your food.”

Carter said people can learn new grilling techniques by watching YouTube videos. But he said a lot of the work to become great at grilling involves learning from mistakes.

After graduation, Carter wants to continue working for his family’s barbecue catering business.

Michael Franzese, of Waxahachie, is scheduled to graduate next spring with an Associate of Applied Science degree in Culinary Arts. He began grilling during his freshman year at Waxahachie High School and participated in a competitive cooking team. He has learned techniques from Matt Pittman, owner of Meat Church BBQ Supply in Waxahachie.

Franzese’s favorite parts of grilling are hearing when the meat is dropped on a hot grill and the sizzle upon flipping meat over the first time.

“It’s the most satisfying feeling in the world,” he said.

Franzese said his six-hour grilled pork spare ribs are his specialty. He said people would be surprised at the number of ingredients he uses. He likes seasonings because of the color they bring to grilled meat.

“You can’t go too fast (when grilling),” Franzese said. “You will have a raw piece of meat on the inside. Low and slow is the way to go.”

After graduating from TSTC, Franzese said he wants to attend Texas Tech University and study restaurant, hotel and institutional management and then open his own restaurant in Pittsburg, Texas, where his parents live.

Registration continues for the fall semester at TSTC. For more information, go to tstc.edu.