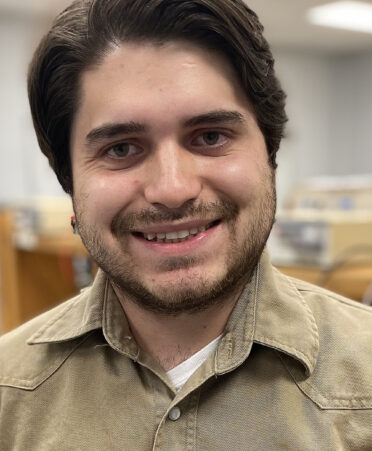 Denton, of Colorado City, is in his final semester of the Electromechanical Technology program. He hopes that the Associate of Applied Science degree leads to a lifelong career.

“At first I wanted to be an animator, but school did not go so well for me,” he said. “I followed that by getting a degree in general studies because I wanted to pursue a business degree.”

But Denton decided that a technical trade may be his best route for a career.

“I was kind of into electricity and old computer systems,” he said. “I thought it would be cool to learn more about it. If I understand it, the more I will enjoy it and possibly make it my career.”

He picked up the curriculum quickly, according to instructor Russell Benson.

“Jeremy is a brilliant young man,” he said. “When he first started, he was looking for his niche. I think he found it. And for me, that is what is great about being an educator. I know Jeremy will succeed with this degree.”

Denton toured the program and quickly learned it was more than he expected.

“I knew a little about the circuits, but when we got on the robotics, that was the best part for me,” he said.

The quality of TSTC’s instructors and staff also factored in to Denton’s decision to attend the college.

“We are more than a number here. People genuinely care about your success in class and the world,” he said. “I do not know of any other school that would take the time to give you resume advice or interview advice.”

Benson said Denton has a drive to succeed.

“He is methodical in every decision he makes because he carefully thinks about his decisions,” he said.

Denton has not decided on a particular career path at this time, but he knows that he will be prepared.

“There are so many different options out there for me with this degree,” he said.

“If Jeremy gets it in his heart, he will be in this field until his retirement,” he said. “He is going to be a great leader and will inspire others to go for their dreams.”

Denton hopes he can one day put his three career options together.

“I would love to be able to mix animation, business and my time at TSTC together in one place,” he said. “I do not know what it would be right now, but it is cool to think about that for the future.”

According to onetonline.org, the need in Texas for electromechanical and mechatronic technologists and technicians will increase by 13% by 2028. The website states that the median salary for a technician in Texas is about $52,000.