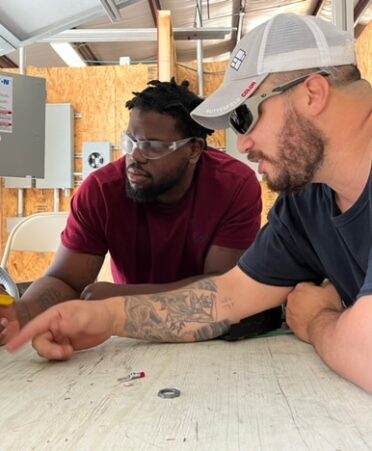 Hugh Whitted, lead instructor in the Solar Energy Technology program, said more than 100 students are enrolled in the two complementary programs, with the spring semester being on track to have a similar number of students.

Wayne Hill, who grew up in Florida and lives in Waco, was overseas in the military when he needed to think about what he would do upon leaving the service. He was told by a friend about TSTC and did online research, eventually choosing to pursue what is known on the Waco campus as the “Triple Crown”: an Associate of Applied Science degree in Solar Energy Technology and certificates in Energy Efficiency Specialist and Electrical Construction.

Hill said he has enjoyed what he has learned so far in his classes.

“If I get my hands on it, I will understand (what is being taught),” he said.

Hill’s goal after graduation next year is to do either electrical construction or solar work in the Dallas-Fort Worth area.

Clayton McMillan, who grew up in Valley Mills and lives in Gatesville, said he chose the Triple Crown degree and certificate plan because he wants to learn how to install his own systems.

“I would like to live off 100 acres and not be tied to anything,” the U.S. Army veteran said.

The future looks promising for graduates.

“There are lots of jobs available, but the problem is there is nothing local,” Whitted said. “Most of our graduates are moving north or south, to the Dallas-Fort Worth area or Austin.”

Solar photovoltaic installers in Texas make a yearly median salary of more than $53,000, according to the U.S. Department of Labor’s CareerOne Stop website.

The U.S. Department of Labor’s Bureau of Labor Statistics has named solar photovoltaic installers as one of the 20 fastest-growing occupations up to 2030. The agency has predicted that 17,900 workers will be needed nationwide by the end of the decade, a 52% increase from 2020.

Students working toward a certificate in Electrical Construction saw a change this semester in their curriculum. Students will take a combined 30 semester credit hours in the first and second semesters, but for the first time they will do a for-credit cooperative in the third semester. Whitted said the students will be responsible for finding an employer willing to take them on. The cooperatives start next summer.

The certificate in Energy Efficiency Specialist has now been moved under the Solar Energy Technology program.