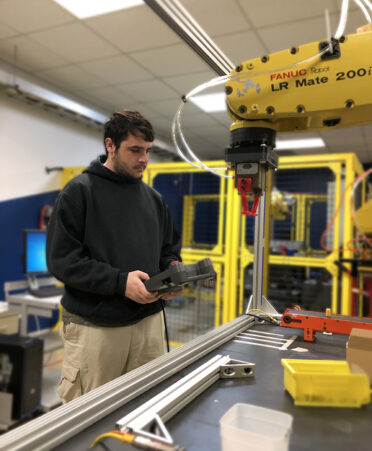 (ROSENBERG, Texas) – Texas State Technical College instructor Charles Sparks would like to help you reframe what you picture when you think of robotics — specifically in the context of TSTC’s Robotics Technology program.

“When most people think of robotics, they envision consumer-based items such as drones, robotic vacuums, cars, trucks, boats and even ‘battle bots,’ as seen on television,” Sparks said.

TSTC’s program is geared toward industrial controls and robotics used in modern manufacturing on a global scale. Typical applications of industrial robots include welding, painting, ironing, assembly, pick and place, palletizing, product inspection and testing — all accomplished with high endurance, speed and precision.

TSTC offers an Associate of Applied Science degree in Robotics Technology in a hybrid format, combining virtual learning with hands-on lab time. At TSTC’s Fort Bend County campus, Sparks has organized each of the five semesters he spends with his students with upmost care to ensure that everyone receives the guidance necessary to obtain a high level of understanding of the course material.

“The first semester is an introduction to robotics,” Sparks said. “Topics include the principles and applications of robots including installation, interfacing, basic programming, maintenance, and safety of robots and robotic cells.”

As students’ understanding of the field expands, so does the array of experience they get in class.

The second semester of study encompasses a study of electro-mechanical devices found in robotic systems, including transformers, switches, solid state relays and relay logic, which includes — to put it simply — building their first control panel from scratch.

After they get AC and DC circuits and AutoCAD practice under their belts, it is time to begin what Sparks considers a very essential part of their education.

“They’re gaining knowledge with their hands-on skills, critical thinking and problem solving,” he said. “They are becoming technicians at this point.”

The third semester is the time for robotics students to delve into basic principles of industrial sensors for automated systems with the operation, installation and application of position, rate, proximity, optoelectronics, ranging, and pressure switches and automation.

Interfacing includes integrating the outside world into the robot’s software, which includes a study of the basic principles of robot controllers, controller input/output, memory and interfacing with computer-integrated manufacturing.

“They’re really thinking on their own two feet at this point,” Sparks said of his students. “Projects at this level require a level of understanding that allows and encourages the student to research available technologies and make decisions that have a direct impact on the project’s success.”

The culmination of the program takes place in the fifth semester in the shape of a capstone project that prepares students to hit the ground running in the real world. Sparks guides his students to create a fully automated and functioning work cell that incorporates all the technology they have learned.

“The customer can say, ‘I want an automated work cell that accomplishes a specific task,’ and they (the program’s graduates) can design, build, program and implement a fully functioning automated work cell,” Sparks said. “They’re highly skilled engineering technicians at that point.”

Robotics technicians can make an average annual salary of $52,010 in Texas, according to the U.S. Bureau of Labor Statistics. Onetonline.org forecasts a 13% growth in such positions over the next seven years.

The program is also a part of TSTC’s Money-Back Guarantee initiative — a testament to how confident the college is that robotics students will get a job in their career field within six months of graduation.

If they do not, TSTC will refund their tuition.

Sparks does not see an issue with a lack of career opportunities for his students.

“An exciting future lies ahead with many possibilities,” he said about where robotics graduates have gone on to work after TSTC. “Tesla, Samsung, Control Concepts, Toyota, Frito-Lay, Amazon, just to name a few — anywhere that uses automation.”