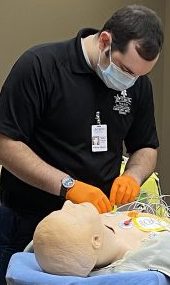 (BROWNWOOD, Texas) – Anthony Monaco has been around first responders his entire life.

When Monaco lived in New York, his father was a volunteer firefighter, and his mother was a nurse. After his father’s job moved the family to Fort Worth, Monaco wanted to continue the family tradition.

After high school, Monaco attended a firefighter academy and was hired by the Stephenville Fire Department. He said the department operates both the fire and emergency medical services operations for the community.

Monaco completed an EMS program at his fellow firefighters’ suggestion and decided to take it one step further. He enrolled in Texas State Technical College’s Emergency Medical Services Paramedic program and now is nearing graduation.

“My entire life has led me to TSTC, and I love it,” he said.

Monaco always enjoyed watching his father rush out to a fire call.

“It was an all-volunteer department, and I knew he was helping people,” he said. “When I was a kid, I would run around the house with his bunker gear on. I knew being a first responder was in my blood.”

Moving from New York to Texas, Monaco said he did not know what to expect. He was surprised at how quickly he was able to adapt to a different environment.

“Texas grabbed me from the start. Everyone has been so friendly,” he said. “I am definitely making this my home.”

That friendliness carried over to TSTC.

“Everyone is so welcoming and wants to take care of us. They want everyone to succeed,” he said.

That includes his instructor, Tim Scalley.

“He works daily to put the things he learns in class into his work,” Scalley said. “It is good for paramedics to learn how to do things in class so they are prepared for the next call they go on during work.”

In working toward becoming a paramedic, Monaco admitted that some of the lab sessions were difficult.

“The trauma scenarios we go through are some of the hardest,” he said. “We have to do a full assessment of the situation of a multivehicle accident and fix each life threat at a time.”

Monaco, who describes himself as a lifelong athlete, likened being in the lab environment to being on a practice field.

“I love sports and always told myself to practice like I would play the game,” he said. “I know the better I practice, the better I will perform in the field. That is how I am pursuing my education.”

Monaco said he noticed his critical thinking skills are heightened when working in the lab.

“I have to keep my mind open, like I would in the field, to assess what I am doing on a patient,” he said. “This is the best way for anyone to learn.”

Monaco said knowing he will join an elite list of people known as paramedics will be rewarding. Texas has more than 20,000 paramedics employed statewide, according to the Texas Department of State Health Services. The need for paramedics is expected to increase 11% by 2028 in Texas, according to onetonline.org.

“My family is proud I am pursuing a dream, and I am proud to be doing it at TSTC,” he said.